"The Measure of Nome" 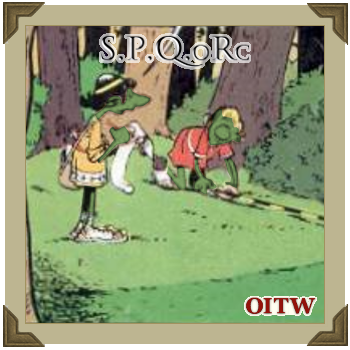 Image taken from Asterix: The Mansions of the Gods
Many apologies to Albert Uderzo for Shading his Romans Green

Centurion Shakslag Brutalus and his Noman Orc unit have been assigned to aide the architect Ugnob Jumpedupicus in what he considers to be a frankly bloody ridiculous exercise in the Boche forests miles away from the front line fighting.

Centurion Shakslag Brutalus was fed up. He stamped his feet, his breath forming thick clouds in the cold Bochemannica air as he sighed heavily. It was bad enough that he was in this bloody awful cold and wet country, but to be taken away from the front lines. Gods. Had it really come to this. He wracked his memories trying to think just exactly which Legate he must have ticked off. Within seconds he could name at least ten. Bugger. This wasn't a duty worthy of a Noman. Looking after some jumped up Orc who wouldn't know a weapon if it got stuck right up his ars...

"Centurion Brutalus?" came the weedy nasal voice of Ugnob Jumpedupicus, architect to none other than Senator Blunt himself.

Brutalus hacked a gobbit of phlegm onto the ground, cheering slightly at Jumpedupicus' look of revulsion. "Yes, what is it?"

The architect visibly bridled, eyes narrowing, "What is it...?" he paused expectantly tapping his finger on the crest he wore on his sash.

Brutalus clenched his teeth, the pause grew louder, the noise of his tusks grinding now audible to all around, "Sir." finished Brutalus icily.

A minor victory won, Jumpedupicus smiled his weaselly grin and waved his hand down at the valley below them. "This is it! This is where I plan to build the senator's villa. Right down there."

Brutalus raised an eyebrow and looked down into the valley, struggling to make out anything through the fog. Why in the nine hells would anyone want to live down there, he thought to himself? It's miles away from anything useful and too near to at least three Boche camps. Out loud he merely said, "Yes sir. And pray tell why are we here today exactly?" obsequiousness creeping into his voice despite the word never having entered his brain "My lads and I, albeit under your command, aren't going to build anything for you. We're fighters through and through. Highly trained killers. The pride of Nome." he glanced over Jumpedupicus' head and watched as one Orc failed to undo the catch on his armour as his toilet functions overtook his attempts to undress and another who was bouncing big stones off his own head into a stream. He sighed and returned his gaze to the valley below.

"I know that very well Centurion. We're not here to build anything. It'll be weeks before we start work." he brandished what looked like a piece of too-thin-to-be-useful rope and shook it vigorously in Brutalus' face. "We're here to take measurements! You can't build anything without measurements!”" he shook the paltry rope again as if by the very act of watching it waggle back and fore his entire plan would reveal itself to Brutalus like a Skirtan Elf slave on festival day.

"Yes... sir." replied Brutalus, realising with increasing gloom that it was going to be a very, very long day indeed.

The Nomans and Boche players can use an existing force or they can generate a new one using the “Your First Command” rules (S.P.Q.o.R.c. – Pax Bochemannica, p.13) or alternatively using a randomly determined squad using the “Pre-Generated Units” (S.P.Q.o.R.c. – Pax Bochemannica, p.62). If you have access to any of the advanced S.P.Q.o.R.c. rules then feel free to use them too. The Noman Orcs need to include Ugnob Jumpedupicus in their force. He should be represented by a Green Militia legionnaire.

Brutalus and his Nomans need to mark out the boundary of the planned villa in the Boche wooded valley. Keeping Jumpedupicus alive will speed up this process but the architect is carrying a fairly detailed plan that, should the Boche succeed in silencing the weaselly Orc, Brutalus can use to carry on the work.

The Nomans have to place marking flags at the four corners of the planned future site of Senator Brunt with each one forming an ‘almost’ perfect rectangle. The two shorter ends need to be 23cm apart and the wider sides 46cm apart (Brunt planned edifice being a 9 inch by 20 inch structure, if things go well for the Nomans you might even get to see it next year ;) – Craig, Ed.) As the first fkag is placed before gameplay begins you can actually pre-mark on a piece of paper the possible locations for the other flags. Do not show this to the Boche player.

As soon as the 4th flag is placed then the magic cantrip that has been woven into them by the Noman theurgists. Once this happens all Boche must test for morale at the start of each turn with a cumulative -1 modifer each turn.

The Boche hate the bloody Nomans. They stomp around in their highly impractical but highly resistant-to-a-good-kicking armour doing all sorts of stupid bloody stuff with the sacred land. Take today for example. A small group of the silly buggers are trying to stick four white flags into the forest floor. Why? Bollock only know and he’s not telling.

The Boche need to make sure that the Orcs do not claim part of their ancient grove for one of their oddly large and draughty buildings. The can achieve this by either:

a) Collecting all of the marking flags and throwing them in the river. If at any point all four flags are in the river then all the Nomans must test for morale at the start of each turn with a cumulative -1 modifer each turn.

b) Killing/Routing all of the Noman Orcs.

For this S.P.Q.oRc adventure I used the excellent 127cm x 127cm Heroic Maps “Lostwere Forest”. It’s a print and play product available here on Wargame Vault. It can be printed out or used in your favourite virtual tabletop software. 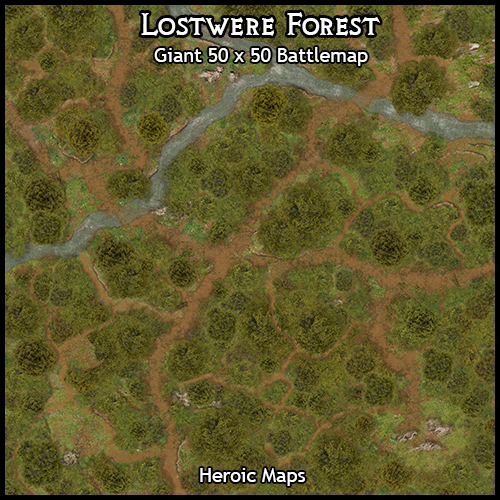 If you don’t have the map or would prefer to use your own terrain simply use the map as a guide as the scenario will work equally well with a little tweaking.

The entire play area is covered by forest, which counts as open/sparse terrain for all Nomans, but as open/clear for any Boche as they are very familiar with this area of land.

Brutalus’ Squadicum can start anywhere on the map. Jumpedupicus must be in contact with one of the trees that marks the corner of the planned villa and has put one flag into the ground.

The Boche Warband can start anywhere but must be within 10cm of a table edge.

The Noman player must deploy first.

This scenario lasts until either sides objectives have been met.

The flags are quite bulky but not heavy and can be carried by any one figure (be they Noman or Boche). They do offer excellent protection against melee combat attacks counting as a small shield (+2).