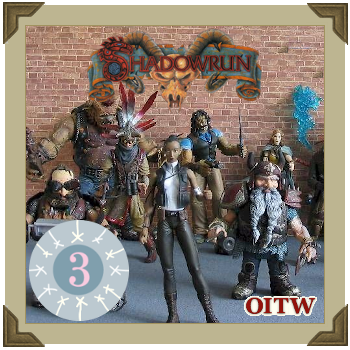 Mr. Johnson is looking to hire runners. He wants the best. You just need to get one of your own to his underground safehouse to meet him face to face. You’d better do it quickly too; yours is not the only team to arrive!

[Editor's Note: Not a Shadowrun Duels player? Not a problem, skip to the end of the article for notes on how to use this scenario  with other rulesets.]

…It’s the way this biz works. The fixer has the contacts with both the corporate world and the team, ya know? He is supposed to set up the meet with any potential Johnsons. But the word on the street is that one Johnson is doing things his own way. He’s looking to pay obscene amounts of Nuyen to a skilled team for what sounds like a milk run. And he’s set up this test, see. Any Sammie, Cowboy or Dandelion Eater who figures out where he is and gets there first will get dibs on the run. So here’s the deal, chummer. I don’t wanna get in your fixer’s biz, so keep it under the table. But I’m the Doctor Know who learned just where this guy is hiding. Sound like info you would consider valuable?

The word on the street is that a Mr. Johnson is looking to hire a crack team of runners. Of course, he is not going to hire just any Jack off the street. He wants the best. Now that the word is out, several runners are gunning for the job. It took long hours and several well placed bribes to find out the Johnson’s whereabouts. Fortunately, it seems you got to his hideout just in time. Now you just need to get one of your own onto the platform and down into the Johnson’s underground safehouse to meet him face to face. You’d better do it quickly too; yours is not the only team to arrive!

Teams should be even in points. Dice for alpha team.

A five inch circle template representing a flat-topped, lowering platform placed at the exact center of the table.

Each team then takes turns placing 1d4 + 3 pieces (total, not per team) of terrain on the battlefield. The alpha team places first. No terrain may be placed within 8 inches of the elevator.

Each team deploys at opposite ends of the battlefield with their dials placed against the edge.

The team with one figure completely on the platform template when it lowers is the winner. A team can also claim victory if all rivals are killed.

Pushing: A pushing check is an opposed skill check (Attacker’s yellow / arms vs. target’s yellow body) that requires giving up one of a figure’s attacks to use. A push attempt may only be made if two figures are in base contact with each other. If successful, the target receives no damage, but will be moved in a straight line directly away from the attacker a number of inches equal to the difference in scores (i.e.; if the attacker scores a 16 and the target scores a 10, the target is pushed back 6 inches). If during the push move, the target hits any terrain (the elevator pad does not count as terrain) or another figure, it will immediately stop. After the target moves, move the attacker in a straight line back into base contact with the target.

Activating the Platform: Once a shadowrunner is positioned completely on the platform, he or she can activate it by making a skill check (Black/Head 12). Figures with a black damage track gain a +1 to their head value for this check. If the runner fails this test, take one click of damage to his or her Head. When the platform is successfully activated, it will lower at a random point in the game. After one complete turn goes by following a successful activation test, begin to check at the end of each turn to see whether the platform lowers. On a D6 roll of 5-6, the platform lowers. If no shadowrunner is completely on the platform when it lowers, it must be activated again.

As with any scenario ever written it can easily be adapted for any gaming system with a little work. If the theme matches you don't need to change the blurb but often a little personalisation for your campaign or setting helps. You also need to check the scale, as long as it works with your rules thats fine. Lastly, and the hardest part is adapting any special rules the scenario contains to your ruleset. Below is one such example:

Setup the tabletop to the scale of your USEME battles (usually 15mm but USEME is very flexible).

Choose your forces from the Cyber Armies lists p.27-30 and play!

Pushing can be represented by moving the losing character in melee one base distance per downgraded attack troll. e.g. If the Attacker rolls +2 more than the target instead of being Struck it is Winged and moved one base distance away. A pushed figure does not get the immedaite attack back (p.14).

Activating the Platform is a Unique Action requiring a roll of 5 or 6 to activate. If using the advanced rules then Communications Specialists (p.16), Hackers (p.18) and Psionics (p.19) activate it on a 4+.

"Face to Face" was written way back in 2003 and has been included in the 2019 Advent Calendar with kind permission from the author. It was first published on Orcs in the Webbe on Tuesday 3rd December 2019.

The USEME conversion rules were added to the original scenario by Craig Andrews and first published on Tuesday 3rd December 2019.