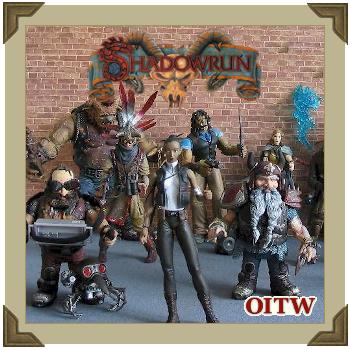 A group of Shadowrunners have snuck one of their own into a corporate building in order to plant a virus which will wipe out the corp’s main datastore.  Opposing the runners is a team of hired corporate muscle anxious to repel any assaults on its employer.

I came into this game for the action, the excitement. Go anywhere, travel light, get in, get out, wherever there's trouble, a man alone...

In this scenario, a group of shadowrunners have snuck one of their own into a corporate building in order to plant a virus which will wipe out the corp’s main datastore.  Opposing the runner is a team of hired corporate muscle anxious to repel any assaults on its employer.

If not playing a linked game, dice for choice of attacker / defender.

The attacking team should consist of a single figure of any point value.  The defending team should consist of twice as many points as the attacking team.  The attacking model may be given 12 points of gear (if playing as a linked scenario, the figure must keep the same equipment from the first mission.  However, all dice “burned” in “Infiltrator” return to the dice pool).  The defending team may be given 6 pts of gear per model.

The attacker must be given at least one piece of black equipment to allow them to access the data store.

A datastore must be placed in the middle of the board.  Each team then takes turns placing an additional 1d4 + 6 pieces (total, not per team) of terrain on the battlefield.  All terrain must be at least 6 inches away from the datastore.  The defender places first.

Each team deploys at opposite ends of the battlefield with their dials placed against the edge.  Up to one defending figure can start the game within two inches of the datastore.  The defender deploys first.

Attacker is alpha team for the first turn.

The attacker wins if he or she manages to plant the virus and escape off his or her board edge.

The defender wins if the attacker is killed before the virus is planted.

A draw occurs if the attacker plants the virus, but is killed before escaping off the board.

Spotting: A member of the defending team must make a successful spot check before being able to make an attack on a hidden infiltrator. A spot check is an opposed skill check (attacker’s weapon range color / head vs. target’s yellow / head). If successful, the target receives no damage, but is considered spotted and may be attacked by any model until a successful stealth check is made. A runner must be able to draw LOS to his target in order to make a spot check.

Stealth: The infiltrator is considered hidden at the beginning of the game. Only the infiltrator can use stealth in this scenario. A hidden runner can only be attacked if they are spotted. Runners become spotted if they take an action other than movement. If allied runners heal or swap gear with a hidden infiltrator, he or she becomes spotted. A spotted infiltrator can hide by making a successful stealth check. To make a stealth check, the infiltrator must be completely out of LOS of an enemy model (i.e.; behind blocking terrain or behind the bases of allied runners) and make a successful stealth check (yellow / head 15). Once this check is made, the target is considered hidden until spotted again. Hidden characters do not need to break away. Opponents who are only in base contact with a hidden character do not need to break away.

Planting the Virus: Once you are in Base contact with the Datastore you can make a skill check to plant the virus  (Black/Head 12). Figures with a black damage track gain a +1 to their head value for this check.  If the runner fails this test, take one click of damage to his or her Head.  Successive tests are at (Black/ Head 16).  Attempting to plant the virus will make a hidden runner immediately spotted.

"Infiltrator" was written way back in 2003 and has been included in the 2019 Advent Calendar with kind permission from the author. It was first published on Orcs in the Webbe on Monday 9th December 2019.