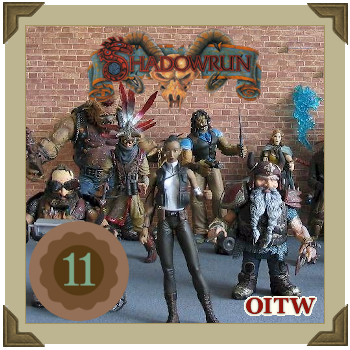 A wealthy businessman’s child has rebelled against the cushy life into which he was born by joining a street gang.  A team of shadowrunners has been sent to forcibly retrieve the wayward son and bring him back to his father intact.

“My son thinks the responsibility of privilege can be shirked off.  I set him up with money, status and a good education.  And what does he do?  He runs off to the barrens because he has it through his head that living on the streets is more “pure” than the corporate life.  Well, no son of mine is going to be hanging around with the scum of the earth SINless! (No offence to present company)  Look, I want you to get my son and bring him back here safe. And, of course, I will make it worth your while…“

In this scenario, a wealthy businessman’s child has rebelled against the cushy life into which he was born by joining a street gang.  A team of shadowrunners has been sent to forcibly retrieve the wayward son and bring him back to his father intact.

Dice for choice of attacker / defender.  The attacker takes the role of the shadowrun team sent to bring the Johnson’s son back home.  The defending team is the street gang defending its own.

The defending player randomly determines which figure on the team is the child of the Johnson.

Teams should be even in points.

Since this is the defending player’s “turf,” he or she sets up 1d4 + 3 pieces of terrain on the battlefield.  The defending player then places his or her figures on the table.  Figures must be placed more than 12 inches away from any table edge.

The attacking team chooses one edge of the battlefield and deploys all his or her figures with their dials placed against the table edge.

The attacking team is alpha team for the first turn.

The attacker wins if the gang member is successfully subdued and dragged bodily off the board.

The defender wins if they successfully stave off the shadowrunner’s assault.

If the businessman’s son is killed, the game is a draw.

Subduing Attack:  Any character can attempt to subdue another by making a subduing attack.  A subduing attack is a special attack which may be made in place of a normal attack.  When making a subduing attack, roll a normal yellow (close combat) attack against the defenders normal defense +5.  If the attack is successful, the defender takes subduing damage equal to the amount of dice plus any normal bonuses to the head area.  A called shot to the head (from a green ace) can also be considered subduing damage.  In this case, no +5 modifier is applied to the defender.  Of course, if no green ace appears, the attack hits and is distributed as normal by the defender.  If this subduing damage is enough to cause three bullets to appear, the defender is considered knocked out, not killed. A knocked out character cannot take any actions, but can be healed by friendly characters or dragged by opposing characters.  Healing works normally per the advanced rules.  If a knocked out character shows no bullets on their head after being healed, that character revives and can act normally.  A knocked out character can be dragged by an opposing character in base to base contact with them.  The dragged character will simply move along in base contact with the dragging character.

Note: Not all damage needs to be subduing damage to knock out a character, just the attack which puts the character over to three bullet wounds.  Conversely, if a character takes normal damage which causes 3 bullets to appear, that character is considered killed even if he took subduing damage earlier in the game.

"Retrieval" was written way back in 2003 and has been included in the 2019 Advent Calendar with kind permission from the author. It was first published on Orcs in the Webbe on Monday 11th December 2019.