A twist on a Classic Board Game by Matthew Hartley

Being the true and accurate rules for Chess in The Land 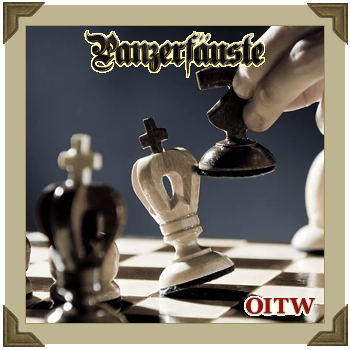 There are many ways in which this world connects with others. Ideas, beliefs and, occasionaly, even people fall between the cracks. One such idea is chess. But as with anything viewed through a glass, darkly; subtle changes occur in every retelling. The Hideous Game tells of how Chess is played in Panzerfäuste's The Land.

"It came from the West, along the trade routes. It travelled by night, striking round the camp fires, one victim innocently infecting another. Morgurin suffered terribly, many spending hours in huddles, cowed by its awesome power. It was rumoured that Death himself fell victim. Even now the sickness is spreading through the Eastern kingdoms; guards desert their posts, farmers their fields, mothers their suckling babes. The fevered cries of the suffers were heard throughout the land - "Check ! Check ! Checkmate !"

- Diary in a Time of Plague

The sequence of play in The Land's Chess is identical to that in chess right here on Earth (White goes first, alternate moves of one piece by both sides, etc.). As is the means of winning (i.e. checkmate of the King). The only alterations are in the range and type of the pieces used.

[You can find the full rules of standard Earth chess on many polaces on the Internet, one of which is here on Wikipedia. - Craig, Editor]

All normal chess pieces (rooks, knights, bishops, pawns, etc.) can also appear in Valonian Chess. They will move in exactly the same manner as they do in normal chess.

This is now however an element of force construction as there are some new pieces, you can choose to replace any that you wish before beginning play:

Move forward as pawns, but take pieces directly forward, rather than diagonally.

Move one or two spaces directly forward. If it takes a piece or reaches a table edge, it may change direction (immediately) to face either to the left or right or back down the column it currently occupies. It continues along that row or column until it takes a piece or meets the table edge.

Move two spaces vertically or diagonally (both moves must be in the same direction). Cannot move less than two moves. May "Jump" over an intervening piece

Move along diagonals (in the same manner as Bishops). May however, for the cost of one piece (any piece) removed from the controlling players side, make a one square shift horizontally to the left or right. This shift is instead of normal movement.

Moves along diagonals (in the same manner as Bishops), but may not move more than 4 squares in any turn. If opponent takes a piece (except the King in checkmate) the Druid piece may be removed instead. The piece that would have been taken is placed on the square previously occupied by the Druid.

This game is one of Matthew Hartley's Flawed Gems, taken from a document containting many of his scenarios and game ideas. It was first published on Orcs in the Webbe on the 21st December 2015 as part of it's 2015 Advent Calendar.

To see the other games Orcs in the Webbe has published in the past click on the maroon  Stand Alone Games  tag just below and to the left.