A Game for Two Players by Matthew Hartley 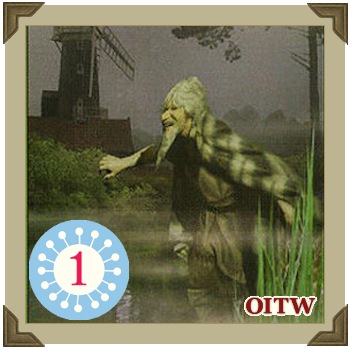 In this year's exclusive free game one player takes on the role of the Dutch Engineer Cornelius Vermuyden as he struggles to cross the Fens in safety to give his report on drainage to the agents of King Charles I. Can the local Fenfolk, aided by the legendary Tiddy Mun, protect thier livelyhoods and stop him...

I live on the very edge of the Lincolnshire Fens. The area, whilst now rich farmland, is sparsely populated, wet, cold and misty. Even now, the area is much more remote from busy urban Britain both in distance and culture than a cursory glance at a map would suggest. I’ve spent much of the last year gathering historic titbits, tales and folklore from the area, and amongst the stories I encountered was the tale of the Tiddy Mun and the Dutch, which I’ve rendered here in game form for your enjoyment, in the spirit of an M R James Ghost Stories For Christmas.

The folk in the Fens lived a marginal existence. Poor, and beset by the ills of poverty, their situation was worsened by their environment and the marsh fever which left them “poor creatures, fit for nothing but to drink gin and eat opium”.

Land drainage in the Fens was begun in earnest during the 1630s by the various investors who had contracts with King Charles I. The leader of one of these syndicates was the Earl of Bedford, who employed Dutchman Cornelius Vermuyden as engineer. The scheme was imposed despite huge opposition from locals who were losing their livelihoods based on fishing and wildfowling. Fenfolk known as the Fen Tigers tried to sabotage the drainage efforts. The Fenfolk argued that ‘bad’s bad, but meddling’s worse’... for they knew of the Tiddy Mum who lived down in the deep green water of the Fens.

The Tiddy Mum was described as “not three foot high, cloaked in grey, with long white hair and a long white beard, all matted and tangled together. He arrived with a sound of running water and a gust of wind and the laughter like the pyewipe screech.” . The Fenfolk since time immemorial had “gone out at new moon in the twilight to call to Tiddy Mun” and make him offerings to show that “they wished him well”.

Distraught at the draining of the Fens and the destruction of his home by the Dutchmen, Tiddy Mun was reportedly responsible for the deaths of several Dutch engineers.

Do I believe this tale? Well, as author Alan Gardner said, I don’t believe it happened but I can show you where it happened...

The game is designed for two players.

One represents the Dutchman, lost on the Fen and hunted by the local Fenfolk. He must cross the Fen along the Fen paths to the (relative) safety of the flatland and town beyond. The Dutchman is represented by a single figure. Three markers are also required to represent the Dutchman’s Scent, which will follow him as he moves across the Fen.

The other player represents the Fenfolk, who livelihoods and way of life is threatened by Fen drainage. The Fenfolk are in league with (and awe of) the Tiddy Mun, an ancient water being which must be placated or who will drag the unwary to a watery end. The Dutchman must be prevented from draining the Fens, and it is well known that folk can easily get lost amongst the marsh lights and will o’ the wisps on a dark night and not be found again. The Fenfolk are represented by three human figures, with an additional figure required for the Tiddy Mun.

Once this sequence is played through a new turn begins, and continues until the Dutchman is either caught or escapes.

The Fen Set Up

The Fen is represented by a six by six grid of face down playing cards.

The Fenfolk place their three figures on any three leftmost card corner of any card on the leftmost column.

During the Movement dice phases, the opponent rolls a D6 dice and keeps the score hidden from the other player.

The dice score indicates how many card edges (representing fen paths) a figure may move that turn.

Both the Dutchman and the Fenfolk move along the joins between the cards, moving horizontally or vertically from one card corner to another card corner.

When a player moves along an edge he moves one edge at a time. As soon as he has moved pieces up to a total of his movement score, the opponent reveals the dice and that player’s movement is over.

The Dutchman may not enter a card corner containing a Fenfolk figure.

A Fenfolk figure may not enter a card corner containing the Dutchman figure.

The Dutchman can leave the Fen by moving off the leftmost edge of any card corner on the leftmost column. If he does so, he wins the game.

Dutchman’s Scent markers already in play are removed from the Fen.

A Dutchman’s scent marker is placed on each of the corners, including the starting corner that the Dutchman has moved through that turn.

Note: A Dutchman who flees faster will leave a longer scent trail than one who creeps more slowly through the Fen.

If the TIddy Mun is on a card and the Dutchman is on any of the four corners of the card, the Tiddy Mun attacks. Both sides roll a dice. If The Tiddy Mun’s score exceeds that of the Dutchman, the Dutchman has been overpowered and drowned in the Fen. The game ends with a Fenfolk victory

* Note that the artwork has been used without permission and will be removed if requested by the copyright holder.