A Complete Game by Michael White 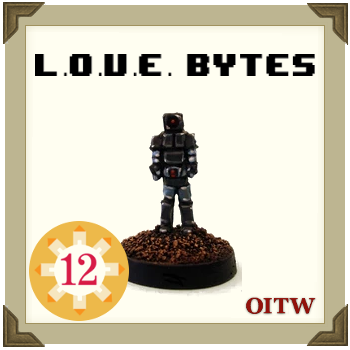 Michael White turns his attention to 4999AD when in the grim twilight of a stupidly implausible future, there is only L.O.V.E. . . .

To download a fully formatted PDF of this original stand-alone game with all the room tiles and tokens you need, simply click on the image below to access the file on OITW's Dropbox.

In the grim twilight of a stupidly implausible future, there is only L.O.V.E. . . .

The year is 4999 A.D., the age of Emperor Akwaerious, somewhere in the vicinity of Betelgeuse. The military stooges at the Laboratory for Obscenely Violent Experiments has gone and done it again. They’ve lost control of another experimental weapon on Research Station Number 9 that could wipe out all of humanity if it ever escaped! Last week it was Atomic Super Mutants, the week before it THAT was a carnivorous Zenosmurph from Altair 7, and this week it’s no less a bad idea . . . Ultra Intelligent Robots With Laser Beams in Their Heads. There’s only one thing to do when military research has gone wrong: send in the military!!! It’s no accident that the Galactic Ranger battle cry is “Clean up after ourselves!”

Therefore, as usual, a team of four Galactic Rangers is being sent in to destroy whatever threat to humanity these idiots at Station Number 9 have concocted and to
rescue the sole remaining survivor. Regulations demand that he be returned to HQ and properly chastised by the brass before being promptly asked to invent another doomsday weapon.

* You will need to print out the counters and room tiles, mount them to card, and cut them out.

**The pawns can be anything you like. Pieces of wood, parcheesi pawns, etc. But for a more appealing game, you may want to consider painted miniatures. Alternative Armies offers a selection of 15mm sci-fi miniatures that are perfect for the game and reasonably priced. The author recommends SFA Infantry with SMG six mixed poses (SKU: HOF96_7) for the Galactic Rangers and Armoured Sentry Robot (SKU: HOF43) for the Robots.

Setting up the Play Area

Place the Airlock named room tile between both players. Beginning with the winner of a coin toss, each player then places one tile each next to an existing tile so that the openings of both tiles are centered on one another until all remaining 12 tiles The only restriction to placing tiles is that you may NOT place a named room tile next to another named room tile. This means that the first tile placed after the Airlock may not be one of the other four named room tiles. Place all of the GALACTIC RANGER pawns in the Airlock. Mix up the 11 BLIP counters face down (so that the radar image is face up) and then place them one at a time until there is ONE blip in every room except the Airlock or the room directly adjacent to the Airlock.

Deal out to each player one Ranger card in secret. The players may look at the card they receive but may not reveal it to the other player.

Two players attempt to score the most points by making sure their Galactic Ranger provides the most entertaining and heroic performance during their mission. L.O.V.E. isn’t just a terribly dangerous and unnecessary organization, it’s also the source of live footage for the hit reality space-vid “Rangers!” In fact, better than 60% of the research budget for L.O.V.E. projects comes from vidverts!

Critics call it an opiate for the masses…

Players flip a coin to determine who goes first. The losing player places the security door stand-up between any named room and unnamed room except the Airlock. The winning player then performs one of the game actions listed below. Players then alternate taking game actions until one of the following three game-ending
conditions exists:

1 – Move a Ranger into an adjacent room. The security door must not be between the two rooms. Flip all blips that are face down in the room the ranger just moved into. A ranger may not move out of a room that contains a Robot.

2 – Move a Blip into an adjacent room. The security door may not be between the two rooms. If the new room contains a Ranger, flip the blip.

2 – Move a Robot into an adjacent room. The security door must not be between the two rooms.

4 – Shoot a Robot in a room with a Ranger. Flip a coin. Heads the Robot is dead and removed from the game. Tails, the Robot shrugs it off and stays put. Any destroyed robot also has its corresponding discovered blip removed from play.

5 – Shoot a Ranger in a room with a Robot. Flip a coin. Heads the Ranger is dead and is removed from the game. Tails, the Ranger moves to an adjacent room of the active player’s choice.

6 – Move a Ranger and the Survivor into an adjacent room. This action can only be taken when the Survivor has been located and is in the same room as the ranger taking the action. Unlike game action 1, a ranger with the Survivor may move out of a room with a Robot. The security door must not be between the two rooms.

Whenever a blip is flipped, look at the number and compare it to the entry below. Follow the instructions listed next to each entry. Place the blip face up next to the score chart to show that it has been discovered and is still in play unless instructed otherwise.

1. Robot: The dreaded Ultra Intelligent Robot With a Laser Beam in its Head!!! Replace the blip with a Robot pawn.

2. Survivor: The sole survivor has been located! Military brass will sure feel better about all this once they’ve had a chance to blame him for everything the other dead scientists did. Note: The survivor can never be attacked or otherwise removed from the game. You may either keep the blip face up on the board or replace him or her with an appropriate pawn or miniature. The survivor never moves unless he or she is moved with a Galactic Ranger per Game Action 6.

3. Faulty Scanner: Your motion scanner must be on the fritz. Nothing to see here except creepy shadows and mist.

4. The Camera Loves You: You are startled by a sudden motion out of the corner of your eye when it suddenly occurs to you the vid-cam has been following your
progress through the station a lot more than everyone else on the team. Better look tough! You’re gonna be star! Place this blip on the blip effect box of any Ranger in the room that caused it to flip. The next time the Ranger scores points, DOUBLE THE POINTS!!! Place the blip out of play once this has occurred.

5. Panic! They’re everywhere!!! Did you hear that? Something’s in here with us! Everybody back to the Airlock! I think they killed Fritz! Somebody on the Ranger team loses their cool and causes the other Rangers to retreat. Take any surviving Rangers and place them on the Airlock. Take all discovered and undiscovered blips still in play, mix them up, and place them in rooms again just as you did with the initial setup.

6. Baby Zenosmurph: Looks like the mission from two weeks ago didn’t get wrapped up after all. You found an immature zeonsmurph from Altair 7. What gives? You should probably kill the little blue-skinned abomination since it will inevitably turn into a man-eating monster. However, there’s a twinkle in it’s ordinarily black and lifeless eyes that you just can’t seem to want to make more lifeless. The little tyke has some spunk! Besides, his blood will probably eat right through your armor and leave you horribly scarred if you shot him.

Place this blip on the blip effect box of any one of the Galactic Rangers in the room that caused this blip to flip. If the Ranger carrying the killer baby moves into the Security Station, he scores 2 points. If the Ranger is killed while carrying the baby, the blip is removed from play permanently. Any other Rangers in the room with the Ranger are also removed from play – corrosive blood spray and all that. Otherwise, it will be moved to the discovered pile once delivered to the Security Station. This last rule is important for the Panic! Blip.

Four of the named rooms have special effects as noted below:

Armory – A Ranger entering the armory may immediately Shoot a Robot in any adjacent Room as if it were in the room with him. Robots, not blips you hope might be a Robot.

Medical – A Ranger located in this room that would be removed from the game by a successful attack instead flips a coin. Heads he remains in play. Tails he is removed as normal.

Security – A Ranger that enters this room may immediately move the security door between any named and unnamed room.

Points are awarded to a Galactic Ranger immediately when the action taken results in the condition below:

If after any action is taken and resolved one of the three end-of-game conditions exists, the game immediately stops and a winner is determined. Both players reveal who their selected Ranger was. The winner is the player holding the Ranger that scored the most points. If a Ranger that belongs to neither player has the most points, the game is a tie. In the event of a tie, the winner is decided by a coin toss.

The above game is an Orcs in the Webbe original and was first published on December 12th 2019 as part of its 2019 Advent Calendar.

You can order the referenced miniatures from Alternative Armies by clicking here or on the big AA graphic below. Once there click on the little magnifying glass icon in the top right to use thier excellent search feature to find the products you want.