A Robust Set of Gaming Rules by Brendon Sterma 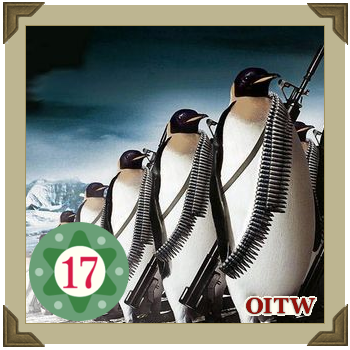 Making his debut on these pages Brendon Sterm brings us a fantastic robust set of Tower Defense rules you can use with any miniatures you own...

Today I will share with you some simple robust rules for playing a casual game of tower defense alone or with a friend!

For this game you will need:

- Multiple D6
- Spinner, scatter die, d12 with clock face or other way of randomly determining directions
- Terrain. Buildings and fortifications are recommended to place troops inside of.
- One or more objective markers
- Paper or digital document for notes and reference.
- Of course, miniatures in whatever scale you desire.

Begin by setting up your play area. This should be a table or floor space of any size you like.

Place terrain in any desired manner, being aware that you will have a wave of baddies funneling through.

Determine the goal. Place some sort of objective marker, object or designate some area of the board as your main objective. A creep reaching this marker will count as a lost life.

Determine your 'towers'. The units you choose are based on the models you have available.

Income: +20
Gain 1 additional point after each round.
Can be taken multiple times, to a maximum of 5.

Buffs: +15
Add 1 to the attack rolls of other allies within 3” Does not stack

Stuns: +10
On hit, enemy loses their next turn

Slows: +5
Next turn, enemy moves are decreased by 3” (Does not stack)

Poison/Acid: +10
Enemy loses 1hp at the end of your turn for 3 turns

Freeze: +10
Enemy loses next turn
If they were to become Burnt, cancel both effects.

Burn: +10
Enemy loses 1hp at the end of your turn for 3 turns If they were to become Frozen, cancel both effects.

Titan: Total Cost Doubles
Range and damage of all weapons is doubled
Range of AoE, explosives and flamers/sprayers is doubled.

The Smolboi Penguin Commissar from Alternative Armies (Sculpted by myself, no bias at all). The model is equipped with a pistol, and given his rank makes me assume he is well trained to shoot. He has no visible melee weapons so I will also assume he is unable to do perform in close combat. 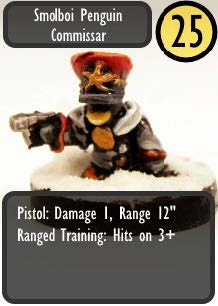 You may set up 'tech trees' if you wish. These are simply writing down upgrades available to your towers, such as adding abilities or replacing the model entirely.

When adding a new upgrade, simply create the stats for the tower as it will be after the upgrade is applied. The cost to upgrade from the first tower to the second tower will be the difference in cost between them. You can also use this method to create branching upgrade paths. Printing cards or drawing your trees will help to keep track of them.

Looking at the Commissar again, I can assume that at some point he will gain the ability to inspire his troops. 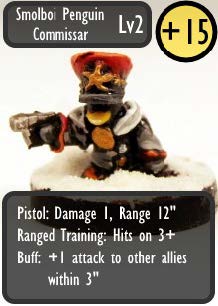 Next, look at your creeps. Apply Rules the the Creeps as well to determine how many points you will receive upon killing them:

Immune: +1
Becomes immune to stun, poison, burn, slow or freeze Can be taking one time for each type immune to

Armour: +1
Reduces damage by one, to a minimum of 0

Buffs Speed: +1
Other creeps that start moving within 3” move an additional 3” Buffs do not stack

Buffs Stealth: +1
-1 on rolls to hit other targets within 3” of this one Buffs do not stack

Buffs Armour: +1
Reduces damage by one, to a minimum of 0, of all other targets within 3” of this one Buffs do not stack

Stun/Freeze (Ranged): +1
May make one ranged attack each turn (after moving) against the closest tower within 12”. A successful hit on a 4+ Prevents that tower from attacking next turn.
May also be used to represent melee attacks on giant models.

Stun/Freeze (Melee): +1
May make one ranged attack each turn (after moving) against the closest tower within 1”. A successful hit on a 4+ Prevents that tower from attacking next turn.

Explode: -1
Deals 1 damage to all other creeps within 3”
May be taken a second time to increase the area to 6”

Summoning: +1 per unit it is able to summon in total
May summon one new unit once per turn (after moving, but before stunning if available) somewhere within 3” of this model. This could be a set position relative to the model or randomly generated.
May be taken multiple times, each time increasing the amount summoned per turn.

Splitting: +1 per unit spawned
Upon death, splits into additional units. Before removing the slain model, place the new models within 3” of it. This could be a set position relative to the model or randomly generated.
May also be used to represent a pilot or crew leaving a wrecked vehicle or a creature transforming upon initial death. Maybe an undead.

These feel like the perfect rank-and-file creeps for us to defend against. The fact that they have weapons themselves doesn't matter because they are only running and won't be using them. However you could add the 'stun' ability to them if you wish the get some use out of their weapons. Baron Petrochemicoli on the other hand Seems like more of a boss character. I imagine he would have some aura buffing abilities for his underlings as well as increased health. 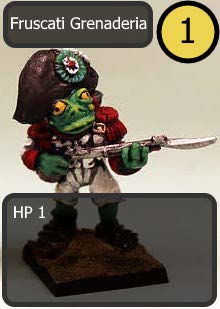 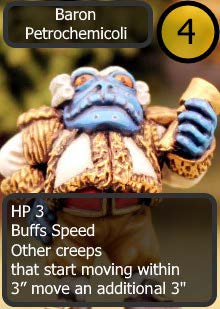 Begin Play by assigning a number of starting points to be used to purchase towers. These can be set or determined randomly by rolling a number of d6 of your choosing. There should always be enough money to buy at least 1 tower. A recommended way to randomize money would be to add the cost of your lest expensive unit.

Enter the 'set up phase' for the defending team. The player may use their points to purchase and upgrade any towers they have available. Once a tower is placed, it may not be moved, but can be sold for half of its total cost, rounded down.

After the set up phase, the wave is generated by either a preset list or by randomly determining it. To randomly determine a wave, create a list of all the available enemy models. Calculate the 'power level' of the wave (I recommend 3 or 5 multiplied by the wave number). Use your list of enemies by rolling on the table to see the results. Keep rolling until the value of units selected equals the 'power level' of the wave. Disregard any rolls that would exceed the total.

Below is a mock-up of a sample chart. For the first wave, I set a power level scaling of 5 per wave number.

Because Khanjira is 16 points, I won't have to bother with results rolled for him just yet. So in this case for the first wave I will only need to roll a d3 to decide.

Say my first roll is a Piscean Warrior. I will then have 1 power level left to work with. Because Baron Petrochemicoli has a value of 4, he would not be able to fit. This means the only unit left will be our 1- value Fruscati Grenaderia.

The enemies always begin play first. At the start of each enemy turn, one enemy from the wave list is placed at the spawn location determined at the beginning of the game.

All models on the board may then move 6 inches toward an assigned marker, landmark or random direction as decided at setup. They may move through other enemies, but not through obstacles or towers.

If one of these models comes into contact with the main objective, the model is removed and the defending player loses a life.

The defender may now take a shooting or melee action with each of their models. Roll a d6 for each attack. Results of 4+ deal damage to the enemy as per the stats of the weapon used.

Usually, the tower will target the enemy closest to an objective, though you may chose to play with each tower selecting their own target, or certain towers prioritizing certain units. The tower MUST have a clear line of sight to the enemy. At least 50% of the enemy must be visible in order for the enemy to be a target.

Currency is rewarded upon killing an enemy equal to their value as discussed earlier. After all towers have fired, the turn changes to the Enemy.

After all enemy units have been removed and the defender's turn ends, the next wave is generated as per above and the defender gets another chance to build and upgrade their towers.

This continues until the defender loses all of their lives or a certain wave limit is reached.

Bonus! A few ideas for variety!

Many people partake in a variety of tabletop games. However not all of them are the same scale. If you choose to mix miniature scales from a variety of games, it can be a great opportunity to show off their differences in size when choosing stats.

For example, Pairing a 15mm Sengoku Guild Hunters miniature with a Warhammer 40k Primaris Space Marine would imply that the Guild Hunters are very small compared to normal humans, perhaps earning them faster movement or lower damage output. You may also decide instead that the marine is just very large himself and boost him up with increased health or heavier ranged weaponry.

Using even smaller miniatures, such as the 6mm Bradley Miniatures rages would even cause the Space Marine to qualify as a titan! It's a great way to incorporate miniatures that normally don't get used together or even other model kits or toys that tower over everything else!

The rules as they stand describe a situation where the enemy reaches a goal and vanishes. This scenario represents a unit entering an important building, dealing damage to a priority target or successfully delivering a pizza. However many tower defence games feature a 'capture the flag' approach where instead of simply attacking a key structure or avoiding the Noid, the enemies are able to pick up and steal an objective to take back with them. You can use this instead of having lives, using either multiple objectives that can be captured, or just a single one to protect for the entire run.

You can accomplish this by having your objective represented by a model such as an artifact, data disc or NPC. Enemies still move towards the objective, but once they come into contact with it they will begin heading back. This can be done with a separate 'escape route' or by just retracing their steps back.

Sometimes the use of alternate paths can be useful when preventing pile-ups in tight quarters, or for adding a strategic variety to a more complex map. This is achieved by simply having an enemy randomly determine a path when it reaches a certain point. You can also assign specific units to go down specific paths. For example, sneakier units may take a less crowded path with more cover.

The rules shown above are mostly described for a single player experience. For multiple plays in a cooperative game, currency rewards are assigned differently, and starting currency is usually reduced. You may choose for players to only get the full amount for enemies they kill, each player splitting the reward, or the killing player getting a larger portion of the reward.

Enemies could be dealt towards each player, each one fending for themselves with no real interaction with each other. One player could completely control the enemies, organizing the waves, choosing directions and targets, etc.

You can even combine both concepts by having the option to use currency to purchase enemies (Using their level as the price) to add to the wave your opponent receives.

* Note that the artwork has been used without permission and will be removed if requested by the copyright holder.