A Settlement for use with All Things Zombie: End of Days by Ed Teixeira 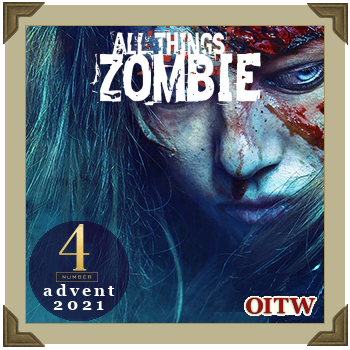 Two Hour Wargames' Ed Teixeira brings us a full settlement for use with All Things Zombie featuring full details for exploring the region as well as rules for Psy Powers and a twelve part campaign framework as Billy and Sooze see what Lake Havasu is like after the end of days.

If you're here for the ATZ article and aren't really sure what Orcs in the Webbe is or why we're doing an Advent Calendar click here for a bit of information and last years calendar in full ;) - Craig Andrews, OITW Editor

It was the End of Days. Economies were crashing: the Rich got richer, the Poor got poorer. And the Governments were letting us down. No surprise there.

Then came the virus. No, not that one; the last one. This one was different. People still died from it except this time they came back. Yes, from the dead.

Everyone’s seen Zombie movies. So, the media couldn’t wait to call them Zombies, even before the Government “verified” their existence. It was all about ratings.

After literally thousands of people verified them in person, becoming Zombies themselves, the Governments “declared war” on the Zombies.

So now it’s a free for all. The Rich have guards, food a plenty and the Poor have, well they’re still poor.

It may be the End of Days, but people don’t change. For some folks, things are really good as they are, better than before.

What will it be for you?

It may be a Post-Apocalypse world, but you can still find groups of humanity clustered together trying to rebuild their lives.

Most of these settlements are in the rural areas and some have gotten quite big; well at least for a Post-Apocalyptic world.

Here's one such Settlement for you to adventure in. What follows is a short introduction to Lake Havasu City, AZ. after the End of Days...

Just click on the PDF Icon below to download/open the fully formatted PDF...

This supplement was sent over by Ed for Orcs in the Webbe and was first published on the 4th December 2021 as part of its 2021 Advent Calendar.

All Things Zombie is an award winning tabletop miniatures and roleplaying game that does things a little differently with fantastic results. The most current iteration, All Things Zombie: End of Days is on Kickstarter for the next two days and you should definitley check it out.