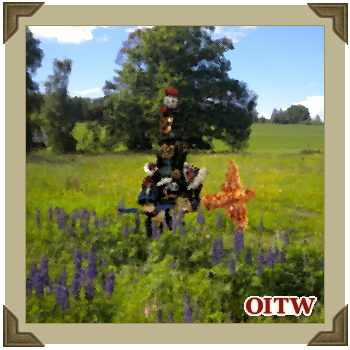 After the Mordredian Wars the famous Albion poet, Samuel Taylor Orcridge, wrote three verses of poetry about the much loved anti-hero Foul Mouth Freddy. Today we see on which events the poem was based and glance at the historical notes as one is a previously unheard of tale involving an Elven Eagle no less...

Freddy, Freddy, Foul-Mouth Freddy
How does your reputation grow?
With orders yelled and Ferach felled
and medals all in a row.

Freddy, Freddy, Foul-Mouth Freddy
Pray, where do your sergeants stripes go?
With swearing louts and drinking bouts
and ending up so low.

The Tales of Sergeant Foul-Mouth Freddy are legendary, an Orc Sergeant both loved and hated in equal measure by subordinates and officers alike in the Grande Army or Albion. Freddy has featured in many tales of daring-do and mishap (see the bottom of this page for details). This simple rhyme was penned by one of the greatest romantic poets of the time, Samuel Taylor Orcridge who was commissioned by The Great Hunvarian Monarch Georgie to capture our hero’s escapades for perpetuity.

The first verse tells of his military prowess and fighting ability, while the second of his love of the demon drinke. These two sides of Freddy’s character have been written about in previous articles. The third verse details Freddy’s greatest adventure - the capture of a Ferach standard – a Golden Eagle at the battle of Cora.

Freddy, a detachment of redcoats and his faithful posse - Viragio, Tricky Dickie, Mad Micky Hooligan and Kenny - were minding their own business when a regiment of routed Ferach ‘pointy-ears’ stumbled into a narrow ravine. The narrowing road caused a natural ‘bottle-neck’, one that Freddy and the experienced Redcoats were quick to take advantage of.

After a short fire-fight the remaining Ferach ran for the hills leaving behind a war-weary standard, topped by an Emperor's Eagle. Freddy wanted to pawn it, but when Wogan heard of the capture of an Eagle he summoned Freddy to his tent and after listening to the report, had Sykes re-write a far-fetched and heroic after-action-report which was even further gilded by certain newspaper men. By the time the reports were being read to the rotund Regent back in Londinium, Freddy had successfully defeated a whole regiment of Ferach Olde Guard, in single handed combat armed with only a broken flintloque (and, of course, his trusty ‘Daisy Roots’) had put the entire regiment to flight while maintaining one firm hand on the precious Imperial Eagle!

For much of the War in Calucia and fuelled by ‘Penny Dreadful’s’ Freddy was seen by many in Londinium as a great hero and Georgie, Bloody Porgie would talk of him in glowing terms and with warm affection. Those in Orcs Guards had another view of our ‘potty-mouthed’ hero and made sure that Foul-Mouth Freddy never came within a hundred miles of the Mad, Bad Regent!

I sometimes wonder what Freddy’s comrades would say if they ever found out that on at least three occasions Orcs Guards refused to allow any regiment that Freddy was associated with to have any leave and return to Albion. The response, full of expletives might have even embarrassed Freddy's Olde Mum.

The Character of Foul Mouth Freddy is based on an Uncle – a close family friend who passed away some time ago. I find it amusing to image what Uncle Fred would think of these short stories.

An Orcs in the Webbe Original! "Foul Mouth Freddy - The Poem" was first published on OITW as part of the 2013 Advent Calendar on Wednesday 11th December 2013.

Foul Mouth Freddy has been a huge hit with Flintloque fans ever since he first appeared here on OITW a few years ago, he has had many adventures published here on OITW as well as three originally published on Alternative Armies' online content portal Barking Irons that can now be found right here on OITW.

"Foul Mouth Freddy Fools the ****ing Ferach"
Can Freddy survive as a Ferach unit try and take valuable relics from an ancient tower which Freddy happens to using for cover.

"Foul Mouth Freddy Divides the ****ing Loot"
Freddy and his companions must retreat through hostile territory with a variety of loot 'acquired' from the pointy-eared Ferach B******s.

"Foul Mouth Freddy Scours the ****ing Town"
After a night of debauchery can Freddy find a variety of things he lost in a booze fuelled haze.

"Foul Mouth Freddy Speeds Through the ****ing Forest"
Freddy must race across the countryside on horseback past local bandits and the ever vigilante Provosts using only his wits and a **** load of bribes.

"Foul Mouth Freddy Sneaks Past the ****ing Guards"
After scouring the town and speeding through the forest, Freddy's quarantined camp is in sight. Can he return the items he 'borrowed' and get back to his tent before roll call at 12 Noon?

"Foul Mouth Freddy Takes ****ing Charge"Having been busted to Private for his excursion to Burrow Port, Freddy must take charge of a green group of Provosts when they come under enemy fire on the way to his Court Marshal.

"Monkey Business"Foul Mouth Freddy and his group of Unlikely Heroes must sneak into the town of Atria searching for urgent supplies whilst Orc redcoats and Elf marines settle an old deep set grudge.

(*Perhaps even sooner than you think... - Craig)