Being in the main a set of Rules for the re-enactment of Naval Battles such as occurred in the late war with the Elves. 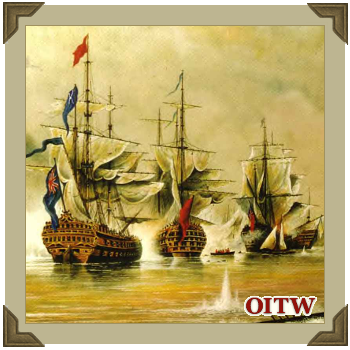 (Image: The Battle of Trafalgar by Michael L Powell)

The Orcs of Albion, the core nation of Greate Britorcn and financier of the Grand Alliance the Orcs of Albion under Kyng Gorge III has resisted the Ferach Empire since the beginning of the Mordredian Wars not just with a small but highly trained and extremely well drilled army but also the best Navye to be found on all of Valon.

Back in the nineties when Flintloque was in it's youth there were no rules for playing Naval Battles in the world of Flintloque (although an official supplement nearly came to be) and a few people had a go at writing them. one such ruleset was the following, Rowloque by none other that Flintloque Alumni Danny O'Hara.In the article below I have combines Danny's history article "The Ships and Navies of Valon" with the rules article "Rowloque".

With a brutal crash and a sickening creak, the timbers of "Aldryame" began to shiver. The ship's company had fought hard, but the heavier broadside of HMS Balrog was finally taking its' toll. Capitaine &Eacuteglefin drew his sword and prepared to strike his colours...

While Wheelingturn has grabbed much of the limelight from the past Mordredian Wars, and even made himself Prime Mincer to King Gorge, his late-lamented contemporary, Lard Hewratio Kneelson, has received much less coverage in writings on the subject. But while the Army of Catalucia played a decisive role in the war, they could have done little without the gallant orcs of His Monstrosity's Navy. This brief overview intends to describe some of the important facts and traditions of not only the Albion Royal Navy, but also the fleets of their allies and opponents.

The fleet of Lard Kneelson is reknowned and feared throughout the world of Valon. With their sturdy, if inelegant, ship designs and punishing broadsides, the Albion RN have been almost universally successful across the world's oceans and seas. Only the East Valonian fleet of the Secessionists has come close to disturbing the absolute control of the sea-lanes that this mighty force has for long enjoyed.

Before the coming of Black Powder, the Imperial High Elf Fleet was a truly impressive edifice. With fast, sleek hulls and accurate bow and ballista shooting, together with "Elf Fyre", had made the navy a feared sight by Morgana's enemies. But with the rise of the Ferach, many of the (mainly royalist) Elven captains fled or were executed, and the officers promoted in their places were largely incompetent, inexperienced or both! The fleet has degenerated, and the unfortunate Admiral Vilenerve has been unable to bring back the old magic. (A few of the royalist captains absconded with their ships and have taken the role of privateer/pirate - as experienced captains with good crews, they are a force to be reckoned with).

The excellent Amorican vessels are largely built under the watchful eye of Cirdain Tellerie, the Chief Shipwright. His technical skill and eye for a functionally beautiful line has resulted in the fastest, most manoeuverable hull and rigging designs in all of Valon. But the quality of officers and ships' companies, together with political manipulation of the Navy, reduced this technical edge to nought. Even so, a competently handled Elfin ship in motion is a sight to behold.

With their amphibious nature, the Todoroni would be expected to have some nautical units. But, as with everything in Nepolia, the fleet is a shambles of old galleys, galleases and ships-of-the-line.

The Troll-lands are home to various clans of sea-trolls and sea-trollka, including the Sjutrolls, Marbendils and Fossgrimen. Some of these are semi-aquatic, but make long sea-journeys in wooden long-ships, with both sails and oars. With the coming of Black Powder, there have been modifications to the ships of the Troll navies, equiping them with artillery. The various troll kingdoms and jarldoms are at each other's throats as much as anybody elses, and the main naval activity is coastal, and any ship entering troll waters is in danger from the long-ships.

With no naval tradition, and little interest in ships and ship-building, the Krautians maintain a very small fleet. But, with typical dwarven ingenuity, they have constructed ships with various automated power-systems and metal armour, making these Krautian vessels an unusual (if restricted) threat.

The Ostarian Flotilla is a largely river-based fleet of armed barges and small-craft, many of oared or oar and sail propulsion. The dogs do possess a few small ships capable of sea-service, but are hardly a naval nation.

With their scattered empire, the goblins of Algarvey were an early naval power. But, as with most of their works, the Royal Algarvian Navy has become outmoded and weak, with a mixture of galleases, ships-of-the-line and loan ships from Albion.

The Catalucians needed a fleet to maintain links between North and South Catalucia. They developed huge vessels capable of carrying large amounts of material by sea, and armed some of these as escorts. Their navy consists of huge floating fortresses, which are heavily built and armed, but unmanoeuverable and poorly crewed.

The Othari are another semi-aquatic race, and again mainly use galleys (or Zebecs) to patrol the Otharmann Sea and other areas. Their Sea-Otter Janissaries are fierce opponents, and capable of living full-time in the water.

Like the Dogs, the undead of the Witchlands have a largely river-borne fleet. Their classic vessel is the zombie-crewed chaika which is a small gallease, capable of travelling through shallow rivers and across ice. Their few high-sea vessels are said to be constructed from the finger- and toe-nails of the dead...

The US fleet consists of small, but powerful, ships-of-the-line. The East Valonians do not build large first- and second-raters, but packs a heavy broadside into their cruising frigates. They do not aim for set-piece sea-battles, but to attack the merchant shipping of their enemies. It is rumoured that a Krautian steam-ship has been acquired by the Secessionists, for use on the Kinkon River in their continuing campaigns there.

Ships are classed as Small, Medium or Large. These determine many of the ship's capabilities, such as movement and ability to withstand damage. The rules are aimed primarily at small actions involving only a few, small ships. Therefore little attention is given to 100-gun ships-of-the-line. Small ships are typically models of up to 35cm length, Medium of up to 60cm and Large anything over this! There are a few models available commercially, but this is really a scratch-builders' area...there was an article in "Wargames Illustrated" #138 on building 25mm pirate ships, which may be of help.

Ships have a basic "move rating" of 48cm (Small), 36cm (Medium) and 24cm (Large). This is multiplied by a factor depending on wind facing as:

The ship can make a 45 degree turn to either side after each 36cm of movement, and the total allowable move for that turn becomes that of the new facing (therefore the ship stops if the total move so far equals or exceeds that allowed by the new facing, i.e. if turning into the wind where the movement is zero). The ship may turn "on the anchor" (i.e. if stationary) by spending 3 turns at this - the turn is 45 degrees as usual.

Ship's boats move at 5cm per figure rowing, regardless of wind-direction.

Ships are treated as structures in Grapeshotte - they have 5 sections for damage: Bow, Stern, Port, Starboard and Rigging. Bow and Stern may only be fired at by an enemy ship or shore-battery "raking" the target - i.e. firing in a direst line down the length of the ship. All other fire on the hull is at Port or Starboard. Firers may target either hull or rigging. Rigging hits slow movement, while a breach of any section of the hull will sink the ship. Typical statistics for ships are:

If any hull section is brought to zero points or less, then the ship will sink in 1D3 turns. Crew will have to either board a ship's boat, float on a piece of wreckage, or swim! Rigging damage reduces ship speed - for every 25% of rigging points taken in damage, reduce the basic move rating by 25%.

Many of the weapons used in Naval Warfare are covered in "Grapeshotte", and the statistics can be found there. I will add some of the more specific weapons here as time permits (i.e. 18lb and 24lb guns, carronades, true grapeshotte, chainshotte, double-shot, etc.). Some of the more particularly naval small-arms (Dark Elf Musketoon, Grenade Launching Carbine, Volley Gun) are also covered in "Grapeshotte".

Ships' guns (i.e. the artillery) can only be fired in a straight line perpendicular to the direction in which the ship is pointing (for broadside guns) or directly ahead or aft (bow- or stern-chasers). Small-arms (including Volley Guns, which are usually attached to the gunwales) may fire as per usual FLQ rules. Case shotte uses the template as per "Grapeshotte", and effects all figures covered as in land games.

As noted above, the firer may target either the rigging or hull of the target ship. Damage is inflicted as normal FLQ/Grapeshotte, but additional "collateral damage" rolls need to be made. For every 10 points of damage to any section, roll 1d6 and consult the relevant table:

The following is largely from "Grapeshotte", which is currently out of print and likely to remain so. As some people do not have access to this (excellent) rulebook, these might be of use:

The current printing of Grapeshotte is still available and contains all the cannons you will need in your games of Rowloque.

Most of the above is un-playtested! Please let me have any feedback and we can develop a decent set of Flintloque Naval Rules.

"Rawloque" and "The Ships and Navies of Valon" were originally published on Danny O'Hara's excellent Flintloque website back in the late Nineties and were first published on Orcs in the Webbe on the 15th February 2006.

It was absent for several years due to a prior regeneration of the website not transferring everything over correctly, the wrong has now been righted and it returned on Trafalgar Day, the 21st October, 2015 as part of Orcs in the Webbe's ongoing Flintloque Archive Project.

All comments in maroon in the article above have been added by me either to provide additional information or clarity. I have also made small changes to grammar and layout but have not marked these.