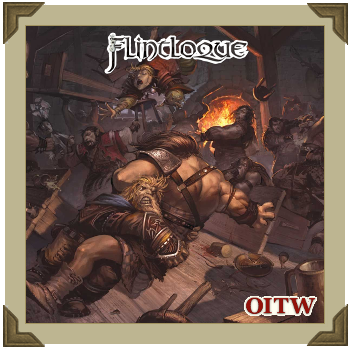 “BRING ME MY PIPE!” bellowed his most Royul majesty, Kyng Gorge III of Albion. The crystal chandeliers of Wind-Sore Palace jingled and the footmen quivered at the ferocity of the Kyng’s demand. Butlers ran hither and thither, terrified, all at their very wits end.

A fire burned fiercely in the huge hearth as the Kyng shifted his great imperial bulk on his richly upholstered throne-lavatory. He smiled, almost imperceptibly, it was nearly time.

A footman approached, head bowed low, to present his majesty with the aforementioned pipe. The golden instrument lay upon a purple velvet cushion, very much a pipe fit for a Kyng of Albion. Alas, noted Gorge, there was no tobacco accompanying it.

“BRING ME MY BOWL!” roared the irate monarch, loud enough for the urchins of Shawditch to hear him and seek safety under the market stalls. He was enjoying this, he always did.

The servants retreated under the sustained barrage and hurried to find the Kyng’s tobacco bowl. They cursed each other and themselves for failing to foresee His Majesty’s needs. On this, St Shakeys Day, it had ever been thus.

A second footman entered the throne room cautiously, a golden bowl heaped with the finest Virginian Tobacco perched upon a scarlet velvet cushion held tight in his shaking hands.

Kyng Gorge III filled his pipe, lit it off the fire and puffed away contentedly, gazing out through the leaded window at the heavy snowfall covering Londinium. It lay round about, deep and crisp and even, just as it should do. Perfect.

“BRING ME MY FIDDLERS THREE!!!” cried the Kyng, as the footmen should have anticipated. Those still brave enough to remain in the throne room fled, seeking the erstwhile trio. The palace was large and they could be anywhere, there wasn’t a moment to lose.

Left alone at last, Gorge hefted himself up out of his throne using the great golden chain, which in turn delivered a satisfying flush behind him. Pulling up his breeches and grabbing a rather tatty overcoat from its concealment behind a curtain, he cast his off crown letting it clatter to the floor. Dashing the windows asunder the massive Ogre heaved himself out, leapt from the ledge and plummeted down into the deep snow. Grinning to himself he made off into the grounds of the palace, noting with some satisfaction how brightly shone the moon that night, tho' the frost was cru-ooooo-el.

Some time later, back in the throne room the head footman finally returned with the Kyng’s very fine fiddlers three. He stopped dead, his gaze taking in the empty room. “Oh no, not again!”

Once a year, on St Shakeys Day, Kyng Gorge likes to dress up as a commoner and get out into the taverns of Wind-Sore to observe his subjects and to ‘get to know the common-folk of Great Britorcn’. He has followed this tradition for years, even in the face of the most virulent objections from his advisors and ministers. For it is only by this most fair and noble method that he might come to understand the ways and the thinking of common Orcs. At least, that’s how he sees it.

The royul household, and those ministers and military staff who are aware of His Majesty’s curious practices, view it ever so slightly differently to the Kyng himself. They are more of the opinion that Kyng Gorge seeks out a suitable tavern and then proceeds to get right royully drunk and start a fight with as many of his subjects as he is able to. For the last five years a specially selected squad of Palace Guardsmen has successfully located and extricated His Majesty from these recurrent ‘situations’.

Due to the annual occurrences of lethal fist fighting which have broken out in the taverns of the town of Wind-Sore the day after Cryptmass, the locals have begun to refer to the incidents as ‘Boxing Day’. The strange and powerful Ogre who invariably seems to be at the centre of these inebriated pugilistic orgies of violence has simply been dubbed ‘The Boxer’. Due to the proximity of several large barracks to Wind-Sore there are invariably whole battalions of Grande Alliance troops rammed into the pubs and hostelries of the area, most of whom are ignorant of this quaint tradition. The townsfolk have taken to eagerly awaiting the day to come, lining the streets in anticipation of copious bloodshed.

This year the Kyng has chosen the large tavern named ‘The Fur Tree’ near the centre of Wind-Sore, next to the town square. In the bar at the time of his arrival are a unit of Krautian regulars over for training from Kartoffelberg, three sergeants from the Provost Corps, and a smattering of other drunks and reprobates from various units. No locals are stupid enough to be out drinking on ‘Boxing Day’. 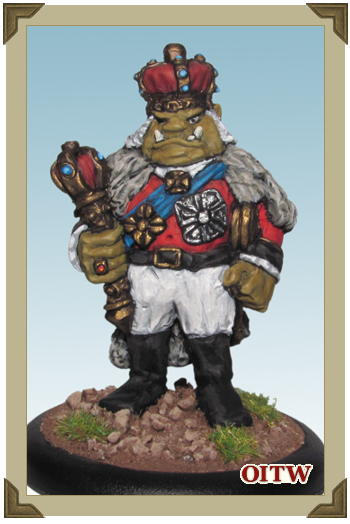 Kyng Gorge in his full regalia painted and based by Nick over on The Lead Mountain Blog.

Kyng Gorge III, Ruler of Albion, “The Boxer”
Full rules for Kyng Gorge and his magicke sceptre can be found on page 47 of the cracking publication, The Rarest Tin. However, for this scenario the Kyng is dressed up as a common Ogre and has not brought his Sceptre, and he’s all ready for a fist fight…
Experienced Regular Elite Ogre
Skill: Brawler (Flintloque:WIC, p.52)
Orc Flaw: Pub Brawler (Flintloque: WIC, p.57)

The 14th Krautian Jägers
The Jägers have been pulled from Kartoffelberg and shipped over to Albion to be trained by what Wheeling-turn calls proper soldiers. Exactly what he thinks of the Dwarves is known to him and him alone, or so he thinks. In actual fact the Dwarves ability to walk almost unnoticed through Grande Alliance camps throughout Urop means they know exactly what Wheeling-turn thinks, says and does. This has led to a certain amount of animosity in those Dwarves who are being forced to learn things ‘the Albion Way’. This is not the only reason the 14th are out a-drinking on this St Shakeys Day. That bloody grand standing idiot Rudolf and his sodding Raiders, Donner and Blitzun, took all the credit in their most recent foray into the Witchlands and the 14th didn’t even get a mention in the dispatches, hence why they were now here in Albion ‘learning’ how to fight.

There are eight Dwarves of the 14th in The Fur Tree. Their names are: Dasher (Section Leader), Dancer, Prancer, Vixen, Comet, Cupid, Donder and Blixem. They should be generated using the standard unit creation rules. Skills should be assigned by experience and Traits, Flaws and Magicke diced for. I recommend using the Krautian Dwarf Skills, Traits and Flaws on p.64 of Bier & Bones as they add a lot of Dwarven flavour to the troops.

Londinium. At Cryptmass. Again. Bloody Hell. Every year it was the same. Not able to control the overflowing population mixing with each other and increasingly large number of drunk soldiers stationed at home, the sodding Alliance brass decided to ship in large number of Provosts to help ‘keep the peace’. Sod ‘Em. Sergeants Gold, Frank and Muir were damn well going to have a night off. A few quiet drinks in The Fur Tree would be just what they need.

Especially Frank, he had been so wound up yesterday he was practically incensed…

St Shakeys Day. Every year the same story. The Kyng, Sentinel Save Him, somehow escapes from the palace and heads to a pub and starts a fight. Every year the palace assures us they’ve got it covered and the Guard is reduced to a minimum to allow people to see their families to keep morale up. Every year I, Captain Heart, and the lovely Lieutenant Mielle get whoever’s left in station to back us up in a massive pub brawl. This year we’ve got two well trained but miserable buggers, Johnsod and Barbar, no surprise they’ve got no family. And then there’s Willow. Private Eorc Willow. Has family but drew the short straw as he’s new to the Guard. Poor bugger, he’s got no idea, wait till he sees the Kyng after a few pints. Ah, there we go, that’s the bell, time to rescue the ruler of Albion. Bloody drunken Hunvarian, ahem, Sentinel Save Him.

* If you don’t have Grapeshotte then use Grenadier Troop Type instead of Guard Infantry.

There is no map provided for this scenario. The gaming area should be about 2’ by 2’ and dressed to resemble a typical Georgian style pub. Wooden floors, a big fire, casks of ale, plenty of chairs and tables and perhaps the odd stuffed Elf head decorating the walls.

The Dwarves and Provosts should be placed randomly in the bar using any mechanism you want. The Kyng player may place “The Boxer” wherever they wish. The scenario starts with Kyng Gorge throwing the first punch. As it comes as a bit of a surprise the defendee gets a -4 modifier for the first round of combat. Once this punch is thrown roll 1D4, the Royule Retrieval Team show up that many turns later at the main door of the pub. The tuen they appear Willow (using his Stealth ability) can be placed anywhere in the pub as per the skill description.

You can (and should for maximum enjoyment) place a selection of other characters in the pub, use any miniatures you want to. They should be controlled by the solo rules and select targets randomly for maximum chaos.

Chairs, tables, barrels, glasses, Elf heads and pretty much anything else can be used as improvised weapons. The Kyng will NOT use anything though (as per his flaw).

As Ben says you don't need any specific maps or terrain for this scenario however I recommend using one of Heroic Maps excellent map layouts, The Trip and Trap**, to represent The Fur Tree. It is available to buy from Wargame Vault**. It can be printed out or used in your favourite virtual tabletop software. 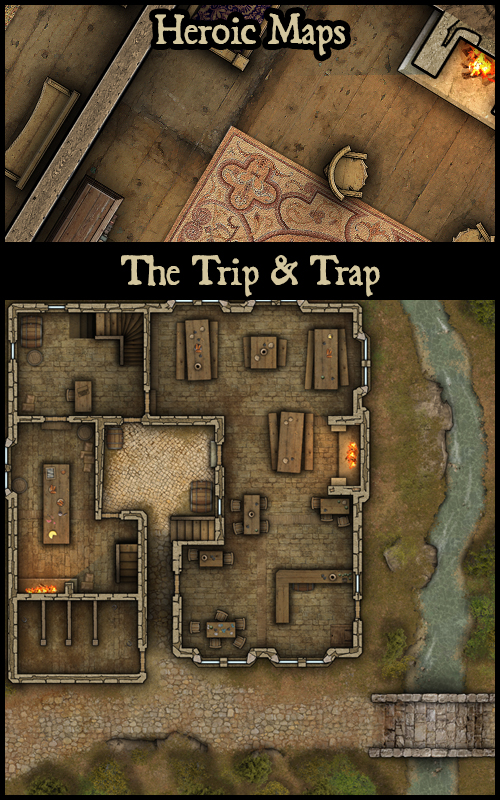 As you may have gathered, Kyng Gorge’s objective is to take down as many figures as possible. All comers welcome. Can he beat last years score ?

The Dwarves and the Provosts are there to add some colour to the fight, they can be controlled either by players or by the normal Flintloque solitaire rules.

The Royule Retrieval Team have to get the Kyng out of the pub, the Kyng doesn’t care that they’re his soldiers, in fact he may not even know, he’s just interested in his ‘score’.

In the spirit of a Cryptmass pub punch up no-one is seriously injured as a result of the fighting, once OOA or removed from the table all characters survive automatically.

The above scenario is meant to be a fun twist on the standard pub brawl found in most wargame systems. The most important factor is to have fun. See if you can beat Kyng Gorge’s score…

"A Right Royule Boxing Day" was written exclusively for Orcs in the Webbe for its 2009 Advent Calendar but due to a variety of circumstances it first appeared on the 2011 calendar and was first published on Thursday 22nd December 2011.

* Note that Svetlin Velinov's artwork was completed for Paizo and has been used without permission and will be removed and replaced if requested by the artist/copyright holder.

** These are Wargame Vault affitliate links and if you buy the map using them I get a few pence credited to my account, its a nice way to support me and Orcs in the Webbe :)