A down on his luck Night Guard Captain and his somewhat less than able command must stop the reactionary Forcs and his followers from blowing up the palace in Londinium and killing good Kyng Gorge! 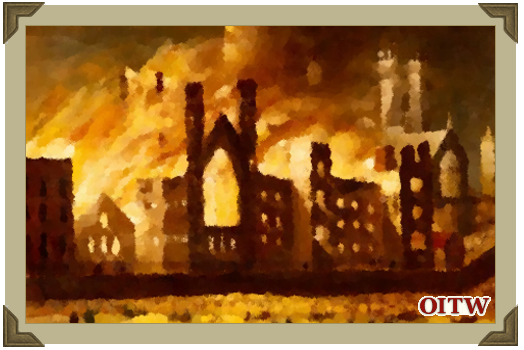 The Great Fyre of Londinium

"So, this is it." said the Orc in the tall felt hat. Gray Forcs co-conspirators all looked up momentarily but none met his gaze. "Tonight we reclaim Albion from that demned foreign Ogre. We will blow that Hunvarian beggar back to his own native mountains!"

With that he bent down and picked up a torch from the bundle at his his feet, the others went to do the same. He continued, "You know the plan. We each head in and ignite the fuses, originally just one of us would have gone in but we have received word from within the royal court that they are somehow aware of our plans." Several Orcs looked up at this, the terror evident in their eyes, one of them dared speak "What! What in Sentinel's name are we doing here then? They'll have cleared the barrels out and be closing in on us!".

He made to move away but Forcs grabbed his arm. "No my friend, my source says that they want to try and catch us in the act. As we said when we started this endeavour, our lives do not matter if the cause is upheld! Kyng Gorge dies tonight!".

Their resolve strengthened, they all bent down and picked up the torches. "Remember do not light your torches until you are in the tunnels, we do not want to alert the Constabulary of which entrances we approach from. You have all see the map, as soon as the clock has struck eight, enter as and when you will, just make sure you light those fuses! Good luck my Brothers, Sentinel be with you!".

As he watched his brethren disappear off into the darkness Forcs thought how lucky he was to have met the Lady who tipped him off mere hours ago, if not for her they would not have known about the trap. He chuckled, after tonight's activities he would try and track her down again. He was sure she must be very beautiful under that heavy black veil and there was something about her voice. Enough, he thought, time to get down to business.

Captain Glee Nelsorc shook his head and smiled. He couldn't believe his luck. He had thought his career was over when he was demoted to the captain of the night watch after a somewhat public indiscretion with a troupe of dancing Goblin women. Luckily his late father's money had not yet quite run out and he started doing what he was best at, spending nights in taverns with drink and as much fairy dust as he could afford. There was no lower he could fall. Just as the days had started to bleed into the nights the lady in black had approached and told him of a plot she had overheard in court that day. A plot to kill the Kyng!

Nelsorc realised this was it, his only chance for promotion and wealth. However, if he were to alert the guard either no one would believe him or worse they would sweep in and claim the collar, well, he was not having that. The plan she suggested to him was simple yet brilliant, he needed to catch the rebellious buggers in the act so he could personally arrest the plotters. He would be Albion's hero. After a few more drinks he would head over to the watch barracks to round up his men, he checked the time, he had a few hours yet so waved to the barkeep just a few more to steady the nerves and maybe some more dust...

Forcs and his fellow reactionaries must try to ignite the barrels in the tunnels in order to kill Kyng Gorge who is in residence in the great buildings above. They must light each of the barrels of gunpowder and then get out before they blow!

Having been tipped off about the attack Nelsorc and his Night Guard must stop Forcs form igniting the barrels in the tunnels, bring the conspirators to justice and save the Kyng of Albion!

Generate a section of Night Guard as per the standard section creation rules in the Flintloque rulebook. The Night Guard are all Militia. They should all be armed as per miniature weapons.

Forcs is a Veteran Orc Civilian and you should also generate a section for him as per the standard section creation rules in the Flintloque rulebook. Forc's plotters are all civilians. They should all be armed as per miniature weapons, however as they are merely civilians they are all carrying an extra hidden dagger or loaded pistol (roll 1D6, 1-5 = Dagger, 6 = Pistol).

To respresent the catacombs I used one of the excellent maps created by Kristian Richards of Crooked Staff Productions. The maps are available for free from their website along with a plethora of other goodies including many more maps and some complete RPG adventures.

You can, of course, use whatever dungeon/interior terrain you have to hand. Ideally there should be a number of corridors connecting some small and large rooms. If playing this scenario with two players then take it in turns to place terrain or work together to build a fantastic dungeon layout. Build the parliament catacombs in any way you see fit, the key objective is to have fun playing the scenario.

The barrels of blackpowder were placed by Forcs associates and as such he did not get full control over their placement although he was supplied a map of their locations. To represent this you should place the barrels on the map randomly. The Crooked Staff map I used was 20 squares by 20 squares so I rolled 2D10 to give me X,Y co-ordinates for each quarter of the map and placed the barrel of black powder there. e.g. for the top left corner if you roll and 7 and a 6, count 7 squares across and 6 squares down and place the barrel. If there is a wall blocking the square just roll again. If you roll doubles place the barrel and roll again for this quarter.

The Forcs player places his group first and they get one full turn before Nelsorcs forces arrive. They can arrive from any entrance square.

The Barrels: Each barrel has been wrapped and stored carefully to prevent the harsh Albion weather spoiling the powder and as such they take one special action to light. Each turn during the initiative phase roll 1D10, the barrels explode on a 10 or more. Each successive turn add +1 to the roll. The fuses can be cut by any figure by means of a special action. The barrels can be re-lit/extinguished multiple times. When a barrel explodes the entire quarter of the map is destroyed, any miniatures in the section must roll 1D10 and add the number of squares they are from the barrel. If the result is 10 or more they are thrown clear into an adjoining quarter of the map receiving 1 Wound and a Shaken token.

Dark Tunnels: The tunnels underneath the palace are shrouded in darkness and you should use the Low Light Skirmish rules found in Grapeshotte (p.21) to represent this.

Dangerous Footing: Due to years of being ignored and neglected, hence why the plan has been possible, the floors of the tunnels are strewn with rubble and other hazards. Each turn when any character moves you must roll to see what type of terrain they are moving over. Roll 1D10: 1-3 = Clear Terrain, 4-6 = Difficult Terrain, 7-9 = Bogging Terrain, 0 = Thwump. Yep, if you roll a 0 that character has misjudged the terrain and fallen flat on thier face. They count as prone for this turn and cannot move until their next turn when they must roll on this table again.

Fairy Dust: Throughtout Valon there are people who claim that ingesting the dust from captured fairies mixed with wine gives one visions of another world and a sense of euphoria. There are others who say this is merely a side effect of the infection caused by what is in effect flakes of dead skin and dirt that is usually mixed wine with of dubious origin. Whoever is right the effects are the same, and are very similar to the effects of the Demon Drinke although somewhat more chaotic. Any character addicted to fairy dust must make a roll on the tipple table every turn and apply it's result for just the current turn. When they are next activated they roll again and use the new result. The Demon Drinke rules can be found on Orcs in the Webbe here.