A Game of Ghouls

"A Game of Ghouls" 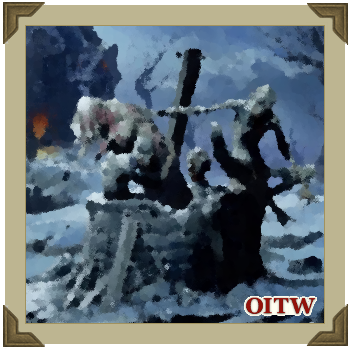 Ongoing reports of cannibalism in the Armorican village of Imladré-sur-Merde coupled with the initial investigative team going missing leads the Ferach special agent, Doctor Moreauwe, and a group of Elven militia in search of monsters.

The one-eyed sergeant looked over his ragged command ruefully – once he had been a member of the 12eme Voltigeurs du Ligne in Catalucia, but an Orcish musket ball had taken his right eye at Albrouhaha and resulted in transfer to the 143eme Milice. Based at Leminge in central Armorica, and charged with maintaining order in a backwater, this unit was a home to the cripples, simpletons, criminals and lunatics which even the not-picky Ferach army wanted. Half of his troops could hardly fire their muskets, and the other half were as likely to shoot him as any enemy!

Added to this, his section had been tasked to escort some strange physician on a mission to a little village called Imladré-sur-Merde. Doctor Moreauwe was a sinister fellow, and the village was known locally as a centre of inbreeding and bizarre events. All in all not a great opportunity to impress his way out of this posting! But always the professional, Sgt Lengólas trudged on with a heavy heart. Apparently the villagers had started eating each other, but why should he care if some inbred peasants did that? Perhaps they would eat Moreauwe and he could head back to barracks? He really was quite worried about the crate of Fyre Grenades in the baggage cart...

With the ongoing wars and blockades causing food and labour shortages in Armorica, the Milice are hard stretched to maintain order. When reports came in of cannibalism in Imladré-sur-Merde, a junior officer and two NCOs were sent to investigate. A week later, one of the corporals staggered back into barracks gibbering about a plague of flesh-eating monsters. His story, whilst scarcely believable, has been passed up the line of military command. The result of this is that a Special Agent (Dr Moreauwe) has been sent to Leminge with orders to investigate, contain and if possible capture some of these beasts for study. Thus Sgt Lengólas and his ne'er-do-wells are escorting the agent to the benighted village...

The action takes place around the little hill village of Imladré-sur-Merde, which has a rambling layout of buildings and a graveyard. Use whatever suitable buildings that you have. There are excellent gravestone and crypt models out there in metal, plastic, resin, wood or card, but you could just put card markers down for the graves.

Dr Moreauwe, Special Agent: Originally a medical doctor, he became obsessed with vivisection, re-animation and experiments to transfer body parts and characteristics from one species to another. He is an able combatant, having some skill with both pistol and sword, but the most startling thing about him is that he regards everything as an experiment to be observed. As a result of this he never takes morale tests.

Sgt Lengólas, Cyclopean Veteran: A light infantry specialist and once a crack shot, his injury has reduced his aim. Proud of his profession, he has tried to instil some soldierly characteristics into his command, but it is something of a losing battle...

Cpl. Ventoux, Alcoholic Madman: Sent insane by his experiences in the Witchlands, he has sought solace in wine. Whenever he is attacked (by missile or melee) or has to attack, roll for morale. If he succeeds, then carry on as normal, but if he fails then roll 1d6 on the following table:

Roll / Result
1 / Psychotic: attack nearest target (friend or foe)
2.3 / Catatonic: take no action (cannot move, fire, nor defend himself)
4,5 / Apathetic: half movement, and treat all firing as at long range
6 / Manic: double move, and an extra attack in melee

The 143eme Milice, Rascals All: The eight private soldiers are sickly, sullen, crippled, criminal or some combination of these. Poorly motivated and poorly trained, but highly expendable.

The unit is equipped with Ferach Elf Muskets and bayonets, while Dr. Moreauwe has a sword and pistol. They also have 6 Elvish Fyre Grenades.

The village has been afflicted with a terrible disease which converts its' victims to flesh-eating ghouls! However, there is no sign of any life (or unlife) when the soldiers arrive.

Full rules for Ghouls can be found in Death in the Snow.

For each building searched by the Ferach, roll 1d6 for inhabitants:

If the searchers enter a tunnel, roll another 1d6:

Ghoul Plague: If a figure is taken out by Ghoul attack, then they will come back into play as a Ghoul in 2 turns unless burned.

Dr Moreauwe's Plan: His aim is to capture at least one Ghoul for experimentation. Any Ghoul which has been killed but not burned, can be trussed up by two figures and carried off by them.

Ghoul Counter-Attack: The Ghouls are intelligent and know that charging out into the open will give the Ferach soldiers an advantage. Therefore they will try to attack in buildings or underground. However, if the Ferach do not advance to search them out, after 3 turns roll 1d3 (each turn) for the number of Ghouls to start appearing in the graveyard. These will try to gather together and rush the soldiers from cover.

If the Ferach are destroyed, then the Ghouls win. If the Ferach clear the village then it is a draw; if they venture into the tunnels and destroy all the Ghouls that they find, then it is a victory. Dr Moreauwe (who ideally should have his own controlling player) will win if he manages to achieve his special plan.

This article was written exclusively for Orcs in the Webbe and was first published on the 7th December 2013 as part of it's 2013 Advent Calendar.