The Oh No Corral

"The Oh No Corral"

A Flintloque Scenario by Luke Passingham 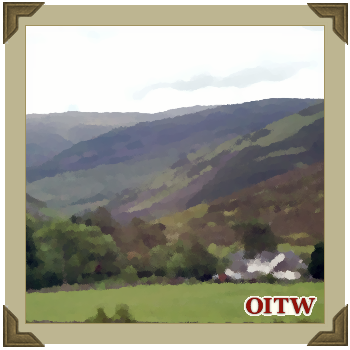 Three Orc brothers head to the small border town of Doomstone to help it's inefficient sherrif take on some local Joccian and Taffsea troublemakers.

Nestling within the hills of Northern Albion, near the borders of Taffsea and Joccia, the small town of Doomstone is a bubbling with an undercurrent of violence. A new Marshall has arrived in town – the well heeled, deadly Virgil Burp, up from the big city of Londinium, accompanied by his deadly brothers. The Burps are tasked with assisting the local hapless law enforcement with bring down the escalating crime rate in the area, a task they have set about with typical Burp kneecap-breaking gusto. Their high-faulting ways and ruthless demeanour has made them unpopular with the local constables and townsfolk alike, and nowhere more so than with the group of men known as Cow’s Boys: a group of toughs working for the local turnip-farming tycoon Cattleman C. Cow. A man with his fingers in all the unsavoury pies in Doomstone – literal and otherwise – Cow has taken unkindly to the Burps attempt to muscle in on ‘his’ town and has instructed his men to run the Burps out of town. Their leader, the outspoken Ike Claptrap, had been boasting around town that he will send the Burps back to Londinium in a set of pine boxes and has arrived with his friends in force to deal with the three brothers, backed up by corrupt constable Johnny The Peeler. The Burps meanwhile have picked up Wyatt’s friend and gambling partner, the psychotic Doc Horrible, and the scene is set for a confrontation that can only end in blood.

Set up the playing area to represent a small area of the town of Doomstone. Use as many buildings and other clutter as you have available – there are not many participants in the battle and without cover it will be over pretty quick.

Line both forces up at either end of the table in a row, cowboy shootout style. Behind Cow’s Boys place three horses – Frank, Billy and Billiam have just ridden into town. These can be used as cover or for Tom to retrieve his gun. Johnny Peeler should be positioned behind a piece of scenery 24cm away from the fight, keeping a cowardly eye on things.

Each model (not Peeler) may then make one free movement action before the game starts as they scatter into cover before the shooting starts.

The Peeler is the local constable in Doomstone. So nicknamed for his habit of eating a lot of oranges, he is also a staunch supporter of Cows Boys, often turning a blind eye to their shenanigans, for which he is well paid in return. He is no fan of the Burps and their fancy ways and has clashed with them on several occasions, and would welcome seeing them removed from his town, permanently or otherwise. However Peeler is also a total wimp and has no desire to get shot.

Peeler is a regular Lowland Rat militia. At the start of the battle he is hiding behind a fence, eating an orange and waiting to see what happens. At the start of each of the Cow’s Boys players turn check to see the number of models still active per side and resolve as follows:

Cow's Boys Outnumber the Burps by One, Or Sides are Equally Matched:

Wracked by fear and indecision, Peeler remains in his hiding place and takes no action this round.

Seeing his chance to rid himself of his rivals, Peeler opens fire on the nearest Burps model. If none are within his line of site he moves to address this, remaining in cover if possible.

Cow's Boys Outnumber the Burps by Three or Only One Burps Model Remaining:

The battle almost over, Peeler heroically joins the fight against the Burps. He falls under control of the Cows Boys player (although he is not counted as a member of their forces for the purpose of victory) and may be moved and attack without restriction.

Only One Cow's Boys Model Left:

Seeing what side his bread is soon to be buttered on, Peeler heroically joins the fight on the side of the Burps. He falls under the control of the Burps player may be moved and attack without restriction.

Because Peeler is the law he may only be fired upon by any model first rolling to see if it can fire as if it has hits on it (Flintloque 3rd Edition Action Phase – Case 2). The exception to this rule is Doc Horrible, who is a lunatic and will fire on anyone at the slightest provocation.

It is assumed that there is plenty of cover around the Doomstone streets – fences, barrels, water-troughs and the like for the participants to dive behind and for bullets to zing off of crazily. Because of this all units are considered to be in Light Cover throughout the whole scenario.

I’d suggest arming miniatures by weapon type as it makes the gaming table a much more interesting place. Having said that, feel free to throw in an additional pistol or knife here and there. Both the Peeler and Doc should have something big, possibly blunderbusses, so that when they do act they make a big impact. – Craig, Ed.

An army veteran decorated for valour, Virgil is now working as a lawman in the Northern Albion area and Doomstone is his latest assignment. He is a shrewd and dangerous man with a keen awareness of when to use violence to his advantage and when not. This is one of those situations where violence will most certainly be used. Virgil is a veteran Orc regular with the Steadfast trait.

Virgil’s brother, Wyatt is a highly deadly and dangerous individual. A former policeman, hunter, bouncer, publican, mob enforcer, miner, ninja, highwayman and boxing referee he drifts wherever his deadly talents take him, leaving a string of bodies in his wake, and has been called in to assist his brother in Doomstone where he has been appointed a deputy. Taciturn and sinister he dresses in black and affects a truly excellent moustache. Wyatt is an elite veteran Orc regular with the Iron Hard trait.

The third of the Burp brothers, serving as assistant to Virgil. Unlike his brothers Morgan is not an experienced killer, but he retains the Burps keen sense of style and penchant for ass-kickery. Morgan is avreage Orc regular with the Jamminess trait.

The local dentist and a close friend of Wyatt Burp, Doc Horrible is also a hot-head, a gambler and a bloodthirsty maniac. He also drinks heavily. All these factors combine to make him the most interesting dentist the town has ever had. Doc is an elite Veteran Orc militia with the Sauce flaw. However to better reflect his unhinged mental state, combined with his tendency to drink and the fact that he is also suffering from advanced tuberculosis (caught from bad potatoes), the Burp player must roll 1D6 each time they wish to activate the Doc and consult the chart below:

1: The Doc doubles over coughing up blood. When this happens, re-roll for the effect of his Sauce Flaw. He cannot act this round.
2 – 4: Doc can be used as normal this turn.
5: Overcome with Bloodlust, Doc advances heedless of risk. He must move his maximum distance towards the nearest enemy model (including Peeler, if he has joined the other side) and attack.
6: Overcome with drink and lunacy, Doc simply blazes away at the nearest figure. Do not move him but make an immediate attack on the nearest model, friendly or otherwise.

Ike is the leader of Cow’s Boys. He is a loudmouth and a braggart, and this combined with his drinking habit has led him into numerous conflicts with the Burps. Accused (justly, it turns out) of the recent spate of robberies and shootings around Doomstone, he has led his band of thugs into town to confront Wyatt Burp, who he has drunkenly threatened to kill. Ike is a veteran Highland Rat guerrilla but is also a coward who will turn and run if things start to go badly – therefore he also has the Coward flaw.

Billiam is Ike’s younger brother. Brash, cocky and aggressive, he is a swaggering bully but although he talks a good game but has never actually been in a gunfight before. Because of this he is a Raw Highland Rat guerilla but has both the Intimidation Big Yin and Taunt Ye Wee Yin traits.

Billy is a huge and hairy Bog Orc, and rumours about his parentage are rife, although never within earshot. He works as the groups muscle. Billy has the Large Fellow trait and is an experienced Bog Orc guerrilla.

The younger of the two McLairy brothers, Tom is not actually armed – he was beaten up earlier that day by the Burps in the pub, and they have confiscated his pistol. He may retrieve a weapon from the horses (where the Boys have a rifle) or from another friendly model, live or dead (it is assumed they all have spare pistols) if he spends a full turn in base to base contact with them. Note that nobody else would dare use Tom’s rifle as they are all too polite and he is the only model who can take it from the horse. Tom has the Hobgoblin singing trait, Valley Voice, and is an average Hobgoblin guerrilla.

Tom’s brother Frank is the final member of the gang. Frank is an appallingly ugly individual, sometimes nicknamed ‘Scary McLairy’ and has made a career as a robber out of jumping out at people from trees, alleyways etc and scaring them silly. He has the Arrogant Peacock flaw to compensate for his looks and is, like his brother, an average Hobgoblin guerrilla.

For either side to claim victory they must essentially run the other out of town – this involves all enemy models being killed or driven from the table. Ideally the winning side should also have the support of Johnny The Peeler. As he will automatically support any side that has a significant numerical advantage this should be fine unless he is killed. If either side therefore eliminates the enemy but has also killed Peeler then the scenario is a draw (time for them to go on the run!)
If Peeler has been shot by the eliminated side then this does not affect the outcome – this merely serves to justify the winner’s claims that they were the good guys all along.

This scenario is based VERY loosely on the Gunfight at the OK Corral. There are differing opinions over what happened that day in 1881, and the characters and actions of those involved are very much in debate even to this day. The only thing I can say with certainty is that whatever the facts may be the reality was 100% nothing like what I’ve written here. The events and people involved are fascinating and well worth some background reading, if you get a chance.

This article was written exclusively for Orcs in the Webbe and was first published on the 6th December 2013 as part of it's 2013 Advent Calendar.