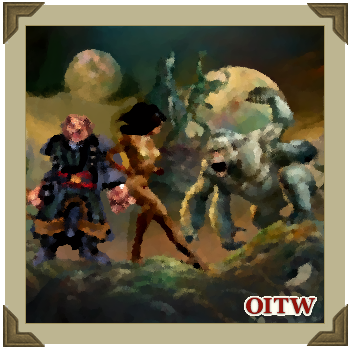 Captain Rekhardt Sharke and his loyal Rifles' adventures on other worlds continue. This time awakening in the middle of a conflict between multi-limbed giants on a red planet known to it's inhabitants as Barsoom.

Rising to his feet he noticed how much lighter he seemed, as if the aches and pains of decades of war had been lifted from his shoulders. Perhaps he was dead he mused, now in the afterlife. Um, where are the orcbint virgins then?

Suddenly a sharp crack split the air and the ground exploded alongside him. Hel’s teeth! Sharke threw himself back down and unslung his Bakur rifle. Swiftly he crawled behind a large rust red boulder. Alongside he could hear his chosen orcs cursing. Harpy was swearing, Not Artur’s paradise then, the Guardians wouldn’t let a Bog Orc in!

Sharke raised his head, trying to spot the enemy. Again a crack and explosion. Red dust covered his head. Morded’s teats! he cursed, what the hel’s was happening now! Where in Valon were they?

A guttural scream pierced the explosions. A sudden rush and the enemy was amongst them! Sharke parried a vicious scimitar slash with his rifle. Jamming the butt into his assailant’s green face. An orc? What the?! He had no chance to think as his opponent pulled his blade free and launched himself at Sharke again.
Sharke jumped backwards - and found himself propelled back several yards! Artur’s blood, he felt as light as a cloud! He pulled his heavy cavalry blade from his sheath and turned to face his enemy. Right, you mother’s scum, prepare to feel pain…

Sharke froze agog. The “Orc” that stood in front of him was almost twice his height, naked and had four arms!!! Clearly they were not in Valon once more...

From One World to Another

Sharke and his rifles materialised on Barsoom in the middle of a battle between Jeddak Tar Tarkas and his Green Martians and Mors Kajak and the Zodangan Red Martians. Obviously the Orcs side with the Green Martians despite the fact they are twice the height of the Orcs and have grown an extra set of arms (something ‘Arris thinks would be very useful when it comes to thieving).

Sharke learns from Tar Tarkas the story of his friend John Carter who travelled between worlds using a mysterious Thern (White Martian) medallion. Hoping that this may provide them with the means to return to Valon, Sharke agrees to help Tar Tarkas rescue the Red Martian Princess Dejah Thoris from the clutches of the evil Mors Kajak, the Princess wearing the medallion (and very little else).

The Orcs of Mars

The background to Sharke’s Barsoom offers a number of interesting possibilities for gamers and you could easily expand this into a longer quest including Red Martian flyers, Green Martian Thoat cavalry and different races such as the Moon Men and Hormads. The low gravity on Barsoom gives the Orcs an advantage of strength and speed over the natives of the planet ensuring they are valued allies of the Green Martians, although their Bakur rifles are poor compared to the widely used Barsoomian Radium rifles.

This scenario however is set at the end of the Orcs time on Barsoom, they, along with Tar Tarkas, have tracked Mors Kajak to an abandoned underground Thern temple in the Valley of Isis.

Temple of the Gods

For this scenario you will need some kind of dungeon. I would recommend something like the board from Heroquest or a similar dungeon delving game. The exact layout of not important and you could use a role-playing technique of laying down the dungeon as the Orcs and Green Martians explore the temple if you want.

The Umpire should control the Red Martian forces and any other encounters within the temple (whoops, is that an angry White Ape we have stumbled across?) as well as deciding where Dejah Thoris is to be found. I would recommend that the Umpire randomly decides encounters between the Orc/Green Martian player(s) and the Red Martians and dungeon fauna by dice rolls, but with the caveat of making it harder if things are too easy for the player(s) or easing back if they are struggling.

The Orc Rifles are taken from the basic game. If you have been playing these advent scenarios use the unit as it has developed after the battles in The Land and Bochemannica. Due to the nature of the Barsoomian atmosphere, the Bakur rifles should be treated as carbines whilst the Rifles are on Barsoom.

Tar Takas has seven Green Martians with him, they are Guerilla troops, four Average, three Experienced as is Tarkas. Use Dwarf stats, they are armed with heavy bladed scimitars and radium rifles. Radium rifles should use Musket stats but do not take any time to reload and only misfire on a 00 roll, not a natural double.

Mors Kajak has two units of ten Zodangan marines under his command. They are regular troops, six are Raw, eight Average and six Experienced. Kajak is also Experienced. Use Rat stats for Red Martians, they are armed with swords and radium rifles.

The Umpire may wish to introduce Barsoomian wild life in the exploration of the ruined temple...

Banth
Large predators, somewhat analogous to the earthly lion, which hunt in the low hills.
Use Bog Orcs stats.

Plant Men
A semi-vampiric race of blue-skinned bipeds who inhabit the Valley Dor on the planet Barsoom.
Use Elf stats.

Ulsio
A horrible Martian creature, somewhat analogous to the rat of Earth.
Use Rat stats.

White Ape
A feared race of semi-intelligent, gorilla-like monsters who inhabit the wilds of Barsoom.
Use Ogre stats.

As previously the Orcs have a limited time to rescue the Princess and win the scenario, I would suggest that the Umpire rolls 2D10 each turn and any natural double means that the Orc player must roll 2D6 lower than the number of Rifles left alive on the board.

Sharke tossed the bloody decapitated head of Mors Kajak aside and walked towards the Red Martian Princess. Wearing only a gold medallion, Sharke appraised Dejah Thoris as he strode across the temple. A funny looking red Elf indeed, but she’d keep you warm on Hogsnachtwatch no mistake!

Suddenly a flash of sepia, that taste of ozone and Sharke once again found himself falling through time and space. He blacked out...

A sharp pain woke him. He opened his eyes to see a razor thin blade pointed between his eyes, atop him stood a Dwarf in a floppy hat sporting the biggest feather Sharke had ever seen. What the?!!

Sharke's world hopping adventures will continue here on Orcs in the Webbe in 2014 in "Sharke's Musketeers"...

An Orcs in the Webbe Original! "Sharke's Barsoom" was written exclusively for OITW's 2013 Advent Calendar and was first published on Monday 23rd December 2013.