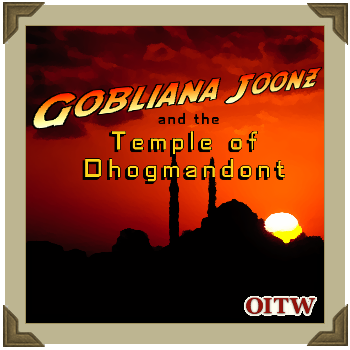 The famed East-Valonian treasure hunter has disciovered the whereabouts of the semi-mythical Scimitar of Mustapha Liq. However, between him and his prize stand  Krautian Agents, Ferach Intelligence, Nippleze Goblins, Othari Janissaries and a bloody big Minotaur with an equally bloody big axe. Will he prevail...

The lands beyond the Kinkon Delta are but little known to the majority of Valon’s inhabitants. Other articles will comment on this Dark Continent in greater detail, but for the purposes of this light-hearted Flintloque game, it is worth noting that a chain of mountains lie inland (in fact, this is where the mighty Kinkon has its birth). On the far side of these Hippyladen Mountains are found some Goblin kingdoms, most of which were conquered at some point by the Othari. Some are now independent, but others retain Othari garrisons. The Goblins (many of "Nippleze" tribal origin) are either followers of the old Goblin religions or believers in the Othari God.

In the exotic town of Dhogmandont, an Oasis town (one known for bushy eyebrows) on the famed Spice Road, stands the famous temple (or "Musk") built by the Otharman conqueror "Mustapha Liq". The Musk contains the incomparable "Ring of Bright Water", a dazzling display of water and light in motion. But the town, while ruled by the wily Othari, is largely inhabited by a Goblinoid people related to the Kinkonese (the Nippleze).

Recently, rumours and documents regarding a unique treasure hidden in Dhogmandont have come into the possession of several interested parties, including:

Always seeking things to sell/melt down & sell/sleep with (or some combination of these), this Orc adventurer recently gained an important clue to the whereabouts of the "Scimitar of Mustapha Liq". Following up on this, he has traced the artifact to the town and is now trying to locate it. If he finds it, this would be worth a fortune! (He hopes not to run into any large, moving rocks this time, though). Joonz is acting alone here, and without any official knowledge or support.

(I used Sharke to represent Joonz).

The famous Krautian adventurer, von Proppschafft has similarly gained a clue to the location of the scimitar, and has arrived (with Otto, his loyal servant) to search for it. He wishes to add the Scimitar to his weapons collection, and again is without official support.

(I have converted both figures for these - they appear occasionally in my scenarios - but you could use a dwarf officer and trooper.)

Dubonnet has also heard that there is a "powerful weapon" in Dhogmandont, and that the Orcs may find it first. This cannot be allowed to happen, and he has travelled here with two aides to find this secret and return it to Amorica. He is disconcerted to find so many Orcish personnel present here.

(I used various Garde command figures, etc. for these).

Other parties are also present, including:

The Major has brought his sepoys up from the Orcish colonies to Dhogmandont, as there are rumours of agitation and simmering revolt amongst the population here. He is ordered to "show the flag" and deal with any agitators as best he can. Oldwife is very hidebound, and will deal firmly with any breaches of the peace. He regards adventuring Orcs, Dwarves and Elf agents as various forms of ignorant, meddling fools who know nothing of the "big picture" and the glory of Albion's East Valonia. He commands 15 Nippleze (Goblin) sepoys.

The various adventurers have all been fed information by the sinister dacoits of Shah Rhound, evil agent of eastern menace! Realising that if foreign adventurers stir up riots in Dhogmandont, the Goblin nationalists can overthrow their Othari masters and rule their own destiny. Hence the clues all lead to the Musk - but entry to this holy shrine is forbidden to infidels. The locals (and the Othari) will not take kindly to intrusion by outsiders, and if the pollution of their temple continues, then violence is likely. Shah Rhound and his cronies will attempt to take advantage of the disturbance to start a Goblin jehad!

Shah Round himself will not appear anywhere near a firefight or melee, but a mob of Nippleze will eventually appear, with various of his agents strategically placed amongst them. These goblins will count as a Militia unit, though individuals will vary in quality (D6: 1=Experienced, 2-3=Average, 4+=Raw) and armament. The total number of the mob will be 3D6 goblins (I use a mixture of Flintloque and fantasy goblin models, including some with original Dwarf Muskets).

There is a small garrison of 4 Othari Janissaries in a small fort (I used the Airfix Fort Saharra model) on the edge of the town. They will only act if somebody desecrates the Musk, or a riot starts.

The Musk of Mustapha Liq

The Musk is the most imposing building in Dhogmandont, and one of the most holy shrines in the Othari Empire. The interior of the Musk contains a series of fountains and pools (the "Ring of Bright Water"), and there is a secret staircase down to the vaults containing the famed Scimitar of Mustapha Liq (actually, the original is held in the Tarka Palace, Itchingball - the copy here is very tacky, with lots of gilded brass and paste gemstones).

Apart from the hostile Nippleze mob, Othari garrison and Othari priests, who will all attempt to guard the Musk, the vaults are guarded by a fierce Minotaur. He is armed with a large axe, and will attempt to kill any non-believers who enter the vaults.

Obviously, the above notes are only the barest bones of a real game! The umpire (and the game can't really be played without one) must ad-lib incidents and interactions between salaaming Nippleze and Othari, and the player groups. Another job for the umpire is to play Shah Round's nefarious activities. There should be plenty of hints and red herrings as the players search the town. They should be prevented from entering the Musk by an unarmed priest (who will flee at any sign of violence, but only to raise the Othari), and will have to start dealing with the consequences as these arise. As a rule of thumb, any killing of citizens, or entering the Musk by infidels will raise both the Nippleze mob (in around 2 turns - they should appear outside the Musk baying for the blood of any foreigners) and the Othari garrison. Any player who finds the scimitar and escapes will find it to be a disappointment, but he may have aided the evil Shah Round in his sinister plot for world domination (he is a bit of a Goblin "Fu-Manchu"). Another point is that Oldwife will attempt to "keep the peace" by setting his Nippleze sepoys on anyone who causes, or seems to be causing, trouble, be they Elf, Dwarf, Orc, Othari or Goblin! Try roleplaying the various characters a bit, for a better game.

The above scneario was originally published on Danny's excellent Wierd Wars website and is included here with permission.