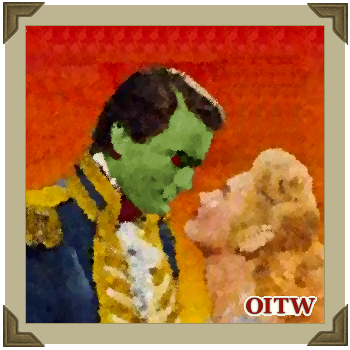 This is the story of True Lust. A lust which transcends the boundaries of race and war to bring together the finest of Albion’s Orchood with the plucky charm of a Ferach maid.

Cast your minds back, gentle audience, to the beginning of the Mordredian Wars. The time of the Ferach Civil War. With Mordred's usurpation, chaos reigned throughout the lands of Armorica. Those who opposed The Tyrant were exiled, force into hiding, or butchered. This is the time of our drama .

Our hero is none other than that pride of Albion’s Main, the dashing, the fearless, Capt. Oratio Hornblairer . Horny's deeds of daring on the high seas are familiar to you all, and his services for the Kyng (Gawd Bless Him) have justly earned him the praise all Albion, and the toast of Bristle.

Our heroine is a Ferach aristocrat. A lady of high breeding, who, with many of her class, supported Morgana against her son. She became the most wanted maid in Armorica, as with cunning and guile she evaded Mordred’s minions to smuggle loyal followers of Morgana to Albion to aid us in the War. For years known only by her pseudonym, she is Bette Noire - The Crimson Bunionette.

This is their story…

Through the crashing surf, the approaching loyalist-seeking Militia, can be heard. Once again, our couple embrace...

These are in two separate Sections:

If you are playing using Flintloque 3rd Edition (namely War in Catalucia) you can use the Marine troop type for Horny's Orcs.

Bette's followers are a section of guerrillas 3 Ferach Elves strong (all Raw), armed with a pistol and knife each.

Bette is a raw Ferach Elf with 2 pistols and a knife.

The Militia, somewhat predictably, are a section of Militia. They are all Ferach Elves with a Raw Lieutenant armed with a sword, an Average sergeant, and 10 soldiers (2 Average, 8 Raw) armed with muskets.

The militia's Muskets begin the game unloaded (nobody patrols with a loaded musket).

The militia enter the beach from the southern edge.

Reinforcements - Each turn, on a roll of 5 or 6 on 1d6, another unit of Militia identical to the first appears, along the Northern edge.

The Jolly Boat - With one rower, the boat moves 4 cm, it moves an additional 3 cm for each additional rower (up to a maximum of 4 rowers in total) . Rowers may perform no other action in the turn. Wounded rowers row at half speed. Shooting from a rowed boat is at -20 %

This scenario was originally published on Mike Baumann's excellent Flintloque website Filbanto Stew. They’ve been around on various prior regenerations of Orcs in the Webbe over the last ten years and re-appeared as part of the ongoing Flintloque Archive Project on the 12th of June 2014.