"The Rocky Road to Albion"

Miniatures painted, based and photographed by Unknown*

Many of you may know that Patrorc is the Guardian Spirit of Guinelia, and that one of his most famous exploits was chasing the vermin from Guinelia, but the full story of this is not so well known...

“Chase the scum, and turn 'em down the rocky road to Albion, Whack-fol-lol-de-waargh!”

A Petulant Mountain Orcling is Set to Work

Patrorc was born into a relatively rich Mountain Orc family, and with typical Orcish indolence he managed to get to his teens without doing so much as a stroke of work. One day, lazing about his family lands, he was suddenly set upon by a gang of Bog-Orc slavers! Fat and unused to combat, the Orcling was quickly subdued and soon found himself a pig-herd in the service of King Leery, a Bog-Orc chieftain.

The grizzling new slave was quickly introduced to his new world of whip, stick, fist, boot and hard work. Not that he took kindly to it, mind you, but it did harden him up into a strong and hardy young Orc. Patrorc continued to grizzle and whine (although not when his overseer could hear!), and started to talk and pray to himself. Eventually he received an “answer” - voices started talking to him in his head, promising that he was destined to rise up and become the most important person in Guinelia! No-one actually knows whether the voices were actually a divine inspiration, or merely the rambling wishes of a distressed teenage slave who found himself (literally) at the bottom of the muck-heap.

Whatever the origin of the voices, Patrorc started to plot and plan with his devious little Orc brain. Eventually, on the night of one of the main Guinelian festivals when the Bog-Orcs crowded into their smoky huts and told tall tales, feasted and drank themselves to oblivion, he said goodbye to his pigs and slipped away. Now he could get home and back to a life of ease again!

Travelling across bogs and hillsides, keeping away from the roads, Patrorc headed towards Albion and home. Eating whatever he could find (rats and moss, mainly), and drinking foul water from boggy pools, he finally turned up on the border as a ragged tramp. The Albion soldiers that he presented himself to found his story highly amusing, and patronisingly said that they would help get the “Mountain Orc Prince” back to his rightful home. Actually they just threw him into a cell to await their officer's return.

The Albion Lieutenant was shown this raving Mountain Orc through the bars of the cell, ranting about his destiny and stinking like a polecat. His clothes and hair were matted and filthy, and his eyes had a fanatic gleam. The officer wasn't sure what to do with him, so called in the local Albion priest to get his advice.

When he arrived, the wily old priest took one look at Patrorc and said “Send him to the Mashingories!”. The officer decided to go with the idea, and packed Patrorc off in a cage to the Grand Order of Albionite Throat Squeezers (GOATS) in Londinium – so called because of their habit of squeezing people by the throat until they agreed with the Order. These fanatic priests would head off into other lands to convince the locals that they should agree with Albion – mainly by hitting and throttling them into submission, hence their common name of “Mashingories”.

The Mashingories immediately saw that Patrorc would make an excellent agent for their so-far failed attempts to make headway into Guinelia. Once they had calmed (and washed!) him down, they put their proposal to him – would he travel back to the land of his enslavement and spread the word?

Patrorc agreed, but the cultists had not given thought to two problems with sending him back to Guinelia – first that he was a Mountain Orc, with no loyalty to Albion, and second that he was barking mad...

Patrorc quickly set about building his own cult of disaffected Bog Orcs, and came up with the idea of “making Guinelia a paradise” by driving all of the vermin (non-Orc and otherwise) out of the country and into Albion! Thus started the famous Vermin Drives.

The Scenario: 'Chase The Vermin'

Patrorc and some of his followers are engaged in one of their periodic outbursts of driving vermin out of Guinelia. As they drive the various creatures along, idling Bog Orcs and Orclings join the chase (little realising that they are actually part of the vermin drive themselves). The whole horde eventually hit the border with Albion, and this is where the game starts: a unit of Orc militia have to try and prevent them from crossing.

The layout is simple – a 6'x4' table with scattered cover, and a road running the length of it. At one (short) end are the defenders (Albion Militia) who are limited to the first 18” of the table (which is Albion – beyond this is Guinelia, and they are not paid for foreign service!). At the other enter the vermin horde, followed by Patrorc and his followers...

Vermin Horde starts with 2d6 Vermin (models or markers), then roll 1d6 each turn for new arrivals, roll and place these models before rolling for initiative:

Once Patrorc arrives, no further rolls for arrivals are made.

The Vermin start in the middle of their board edge (around the road) and initially move straight towards the Albion edge. However, after the first turn roll for direction changes (1d6) as:

All vermin will follow the same direction, and Patrorc's gang will follow them. If within a Double Charge move of an Albion soldier, an individual Vermin, Orcling or Bog Orc may instead declare a charge at this model.

The Bog Orc and Orclings of the Vermin Horde are armed with melee weapons only, 50% chance of large improvised (+0) and 50% chance of small improvised (-1), while Patrorc's followers have Bessies. (Patrorc himself is armed with only a staff, +1). All of the Vermin (Orc or otherwise) count as Raw Civilians, but Patrorc's gang are Elite Veterans (i.e. fanatics!). Patrorc is a Mountain Orc but uses Bog Orc stats. The Vermin Horde have the normal penalties for being Civilian with the following exceptions: they do not need to be attached to a players section at the games outset and they do not have a section leader so do not have to remain within 15cm of him and cannot be given a shaken marker for death of a section leader. However, after entering play, if Patrorc is removed from the board by the Militia player then all Vermin and Patrorc's followers get a shaken token in the Wound & Morale Resolution phase as normal.

The Albion troops consist of 1 sergeant (Experienced) as thier section leader and 8 Militiamen (Average) all armed with Bessies. They are all regular Militia.

The game continues for one turn after Patrorc has moved off (or been removed from) the table. Victory points are then calculated for both sides:

Orclings and Vermin move as Orcs, Bog Orcs move as normal, and the modified stats for the Vermin Horde are below (the stats below are unarmed, use melee stats as they are for large improvised, take 1 off for small improvised). 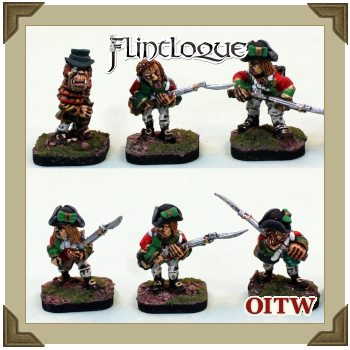 Patrorc and Bog Orcs – fantasy Orcs (and Goblins for the Orclings).

Alternative Armies produce a large range of fantasy Orc miniatures that are perfect for this scenario including a Moutain Orc Shaman who would be ideal as Patrorc, click here to view them on Alternative Armies website.

An Orcs in the Webbe Original ! Danny wrote "The Rocky Road to Albion" as a special request to celebrate St Patrick's Day 2010. It was the second of four Saints Day scenarios OITW published that year.

However, it was absent for several years due to a prior regeneration of the website not transferring everything over correctly, the wrong has now been righted and it returned on the 2nd December 2021 as the second entry in that years Advent Calendar and, of course, part of Orcs in the Webbe's ongoing Flintloque Archive Project.

Danny passed away a few years ago now and I miss his fantastic annual contributions and the Flintloque related banter we used to exchange in the run up to the calendar going live.

* Note that the photo has been used without permission and will be removed if requested by the copyright holder.

You can see more of Danny's excellent work by clicking on the  maroon  tag below.