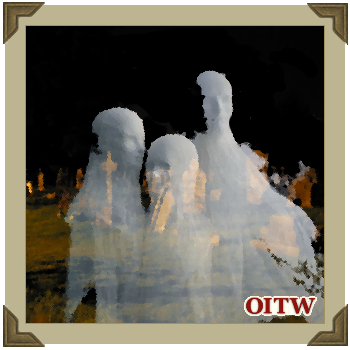 Can the grieving followers of the Dwarven philosopher, revolutionary and tour guide, Skid Marx, escape Hangum Highgate cemetery before the restless spirits frightens them to death !

"Carl ‘Skid’ Marx, Dwarven philosopher, revolutionary and tour guide writer, earned his sobriquet from his famous condemnation of Londinium , in Der Kapital, his monumental study of the heart of Albion, as the “Dung Heap of History”. Amused rather than offended , the inhabitants of the city built his mausoleum in Hangum Highgate cemetery in the shape of a chamber pot with a life-size, and obviously constipated, bust of the great dwarf on top."

Excerpt from Elrik Hobspawn’s “Skid Marx: All Said and Dung”

In honour of their hero, the Marx Appreciation Society (a MAS movement) have gathered for their inaugural meeting at midnight at Skid’s grave. All are dressed in red suits – in memory of his untimely flaying by a spinning suzy in the factory of his fellow exile Fredrik Angles, the noted geometrician and capitalist. All also sport luxuriant false beards in mimicry of the dwarven race.

Unfortunately Hangum Highgate is haunted by ghosts who crave the terror of the living to let them saviour life again. The ghosts are attracted to the mausoleum by the living crowd and move in for the thrill.

Can Skid’s celebrants make a clean getaway? Or will there be a bum rush at a black MAS?

Marxism by Midnight is a stand alone mini-game, best played following or during the consumption of alcohol.

Each player requires one figure to represent their Marxist.

Each Marxist begins the game with a Bowel Control level of 20. This will be reduced as ghosts are encountered. Players must keep a record of the current bowl Control level of their figure. Once a Marxist’s Bowl Control has been reduced to zero, the horrors of the graveyard have overcome him and he is out of the game (and a bit smelly).

A number of undercoated but unpainted figures (c’mon we all have them!) will be required for ghosts.

The game also requires a deck of playing cards with the court cards and jokers removed.

Finally the game requires 40 tiles which are available for you to print onto card and cut out from the PDF below.

Remove the Exit and the Grave tiles and shuffle the remaining tiles into a deck.

The game begins with the Grave tile in the middle of the play area. Each Marxist is placed on the grave tile.

The top four tiles are drawn from the deck and one is placed face upon each of the four sides of the grave tile.

The game is played in a series of turns, within each turn is a series of phases which must be followed in sequence:

1. Each player draws a card from the deck of playing cards. The player with the highest scoring card completes his actions first followed by the other players in descending card order.

2. Each player draws a tile from the tile deck and without looking at it, places it face down by an outward pointing arrow of an upturned tile.

A Marxist cannot move onto a tile that is not adjacent, or is adjacent but is not pointed at by an arrow on the Marxists current tile. A Marxists who moves onto a dead end tile must move back to the tile he came from on his next turn.

5. Three new ghosts are placed on the grave tile.

6. All Marxists on a tile with ghosts draw one playing card for each ghost on that tile. The sum of the value of the card(s) is removed from the Bowl Control score of that Marxist. The ghost(s) are then removed from the game.

Once 30 tiles have been placed on the table, the exist tile is added to the deck and the tile deck is shuffled.

The game ends when the last Marxist either reaches the exist tile or looses all bowl control.

All those who reach the exist have won the game.

Decorative Santa’s with their flesh painted green make excellent Marxists. Green Santa’s are usefully deployed on the Christmas tree to worry passing clergy and elderly relatives. Mutter darkly about The Green Man and your interest in Paganism…