Dreadloque III - The Goblin in the Smoke - Act I: "The Beautiful Daughter

The Goblin in the Smoke, Act I
"The Beautiful Daughter" 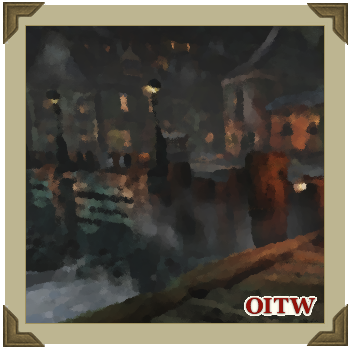 This years ripping yarn set in Danny O'Hara's Dreadloque setting gets underway as three erstwhile heroes try to stop a meeting between the Catalucian Ambassador's daughter and the evil Baron Bron from going ahead.

The prelude to this adventure can be read here on Orcs in the Webbe.

Over the last few months Bron's control of the Windy Isles has become almost absolute. In a bid to strengthen relationships with Urop he has set up a meeting with the Catalucian Ambassador to discuss a truce. Bron has no intention of honouring such a deal, he intends to enslave the ambassador using The Smoke, as he has done with so many others these last few months.

Bron's representatives were going to meet the Ambassadors party in a tavern near the docks of Toblerona this very afternoon. However just hours before he received word the Ambassador had fallen ill and his daughter would be attending instead. Bron didn't mind about the change in plans. In fact, as he thought of what had recently befallen his 'favoured' Dark Elf slave girl, he actually found himself relishing the prospect.

In the tavern Laiquendé, one time pirate turned publican Dubois was just finishing off cleaning things away, just in case they got rough later. After pulling some strings he had managed to get his place chosen by Bron's lieutenants for the neutral ground meeting with the Catalucian Ambassador. As had become custom in Bron's dealings with the locals, when the letter came it had not been a request. So, acting disgruntled, Dubois turned out all his regulars and moved the more expensive drinks into the cellar. As he looked over the empty room he felt a surge of pride about turning his life around and building the old place up from nothing. He would not let Cam Bron ruin it all. His eyes settled on his single patron, a beautiful Catalucian Dark Elf in a fine dress sipping Brandy from his best crystal glass. Soon she would be joined by Bron's seemingly mindless henchmen. But by then he'd be gone, as per Bron's instructions as the meeting itself was to remain private. Little did Bron know things were coming together just as Dubois had planned...

After getting the Laiquendé chosen for the meeting he had greased a few palms and found out exactly when the meeting would take place. Dubois had then passed on the information (for a modest fee) to someone interested in upsetting Bron's plans. None other than Bilbo Nesta Marley, one time hero of the revolt, turned leader of the local rebellion. Marley's hatred of Bron was twofold, firstly he'd used the long sought after Halfling emancipation to set himself up as Baron, and secondly for his blasphemy in using pipeweed to corrupt minds instead of freeing them as per the beliefs of Rasgafferianism. Dubois, like Marley, wanted Bron out of the Windy Isles, so he'd hatched this plan knowing Marley would act upon the information.

Dubois however remembered well the words of his paternal Grandmother; a Roc never lays all her eggs in one nest. This being the case he has also passed on the information (for, of course, a modest fee) to his old rival turned friend, Captain Jack Crebain. Crebain and the crew of the Black Warg were one of the few pirate ships still operating in the once pirate filled seas of the Windy Isles. Bron's control had spread so far so quickly, threatening publican and pirate alike. He knew Crebain loved the life, living "The Code", so much that he would act upon the information.

If Dubois was anything, he was shrewd. He also really really did listen well to the words of his dear Nanna. As such he has also passed on the information (for, yep you guessed it, a modest fee) to the Albion navy. Dubois knew that an alliance between the Dark Elves and Bron could upset the balance in Urop. He knew the Admiralty he fought against for so long back in the early days would act upon the information.

As he bid farewell to the beautiful Dark Elf he couldn't help but think she looked familiar. Ah well he couldn't worry about that now, he gathered the last few things he'd sorted on the bar and left, checking the cellar lock as he went.

The Dark Elf furtively looked around, checking she was alone. She downed her brandy in one and pulled a small powder case with mirror from her sleeve reapplying some dark colouring to where the drink had exposed her naturally lighter skin around her lips. She smiled, satisfied, her skin now once again as Dark as a Catalucian's. Then in a single fluid motion hoisted up her skirts and checked the two pistols strapped to each leather clad thigh. Her smile deepened...

There is no map for this scenario. The playing area should be setup with as many buildings as you have to represent the winding streets of Toblerona. In the very centre of the area there should be a building (with removable roof for inside play) to represent the Laiquendé.

Some of Bron's newly 'loyal' men have been sent to the Laiquendé to meet the ambassador's daughter and escort her to Bron's estate. All of the group have distant looks in thier eyes and slightly pallid skin. The overall effect is quite disconcerting, almost as if they are going through the motions but not focusing on the events around them. Bron's support has come from many different parties and as such his section can be represented by whatever miniatures you have. No starting stats are needed as per the solo rules where experience levels are discovered during play. They are armed as per weapon type on the figure.

They are controlled using the normal solo rules coupled with the behaviour below:

Bron's men get one full action phase of movement before everyone else where they will move at Quick March towards the Laiquendé. Next turn they roll for initiative as normal. Each turn they will move towards the bar until they are engaged by an heroic player's troops. Once this happens they are controlled according to the solo rules using the Aggressive results table. If they managed to get to the bar unchallenged then the 'Ambassador's Daughter' becomes part of the section governed by the same rules. They will then try to head off the board, moving at Quick March, by the side they entered from. They only start using the Aggressive results once engaged.

One thing to note, due to the nature of Bron's controlling influence they all get +1 Steady and +1 Discipline on racial standard however they also get penalised with -1 Melee and -10% Accuracy.

The 'Ambassador's Daughter' starts in the Laiquendé. She does not move as normal in this scenario and like Bron's men is not directly controlled. She will remain in the bar until Bron's men arrive, at which point she will go with them. Should anyone else try to take her away she will put up quite a fight. She, once engaged (or having left with Bron's men and subsequently engaged) uses the solo play rules but using the Defensive results.

To play the heroes in this adventure is simple. Just pick the hero you want to be from the three below and then generate a section of ten characters to support them. Use the section creation rules on page 46 of Flintloque - War in Catalucia as normal but with the following restrictions.

Flassz-Orc's section are Albion Marines so must be Orcs and have the Marine Troop Type. None of them can be Elite (as Flassz-Orc's Orcs were not picked from the cream of the crop).

Crebain's section, being swarthy pirates can be of any race and take the troop type Irregular.

Bilbo's section are fellow revolutionaries opposed to Bron's rule of the Isles and must be Halflings. They must all have the troop type Irregular. The stats for Halflings can be found on Alternative Armies official Yahoo eGroup, The Notable Member in the files section.

All three heroes share the same goal, get to the 'Ambassador's Daughter', capture her and lead her off any table edge.

To try and take the the 'Ambassador's Daughter' prisoner someone must engage her in hand to hand combat and declare before rolling the die that they are attempting to take her prisoner rather than going for a killing blow. If at least one wound would be scored ahe is considered captured, the miniature is then controlled by the capturing player but must stay in base to base contact with the miniature that captured her.

If a character holding her is pushed back, knocked out of action or killed then she is once again controlled by the Solo Rules but this time as Aggressive. Whilst escorting her the character in question can move no faster than Slow March. They also may not fire a firelock due to her struggling.

Whoever succeds in getting the 'Ambassador's Daughter' off the board wins the scenario.

The next adventure of "The Goblin in the Smoke" can be read here on Orcs in the Webbe.

This adventure was written exclusively for Orcs in the Webbe and was first published on the 12th December 2009 as part of it's 2009 Advent Calendar.

It was a favourite among Flintloque players and in 2008 Danny returned to the Windy Isles with the follow up tale, Dreadloque II "Dead Dwarf's Chest" which came in three acts with a prelude. The prelude, “Strange Winds and Unusual Currents”, set the scene for our heroes. It's first act, "The Wild Island", featured a rousing bar brawl. It's second act, "Return to Traitor's Island", saw the characters take up a frantic search across a feral wilderness. The third and final act, "Search for Shambog's Gold", was an old school style dungeon crawl featuring monsters both magical and undead.