Dreadloque III - The Goblin in the Smoke - Interlude: "Something Strange in Them There Tydes"

The Goblin in the Smoke: Interlude
"Something Strange in Them There Tydes" 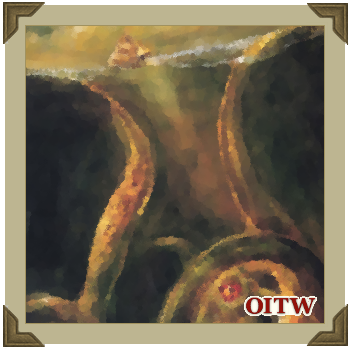 Carrying on the story where we left it back in 2009, the 'Ambassador's Daughter' has been captured by our heroes and the evil Bron's plans have been averted. But as oft is the case in tales such as these all is not what it seems...

The prelude to "The Goblin in the Smoke" can be read here, and the first act here; both exclusive to Orcs in the Webbe.

The beautiful Elf sighed as she looked around the untidy cargo hold she'd been tied up in. She couldn't bloody believe it. Captured. Captured by bloody do-gooders. Male bloody do-gooders to boot. Her crew would never let her live this one down. She looked at her arms and legs bound as they were, her fair Ferach Elven skin was showing through in over a dozen places. The make up giving her the caste of a Catalucian had mostly come off in the skirmishes across the docks of Toblerona. These damned fools must have seen that whilst tying her up. They would figure out she wasn't the Catalucian ambassador's daughter soon. What would they do if they figured out who she was. No, she couldn't think like that, not yet anyway. Besides she hadn't gone by her own name in years and she'd done a lot of growing up in that time. What could she tell them. The truth maybe? She had to get to Bron's Island today or the Windy Isles would be forever in the grip of that damned Goblin.

This Interlude in Dreadloque: The Goblin and The Smoke serves two purposes. Not only does it give players a reminder of where we left our heroes at the end of The Ambassador's Daughter back in 2009 but also serves to introduce players to Strange Tydes, Wessex Games' excellent fantasy age of sail ruleset, a ruleset that will be making regular appearances as part of OITW's Dreadloque plans for 2013.

As you may remember when we last left our heroes they had just interrupted a meeting in a Toblerona tavern between some representatives of the evil Goblin Bacci, Cam 'Lucci' Bron, and a mysteriously well trained Dark Elf they believed to be the Catalucian ambassador's daughter. Well, as the introduction above shows things were not quite as they seemed.

With any new game getting your head around the mechanics can be tricky, especially if you add the competitive nature of a wargame to the mix. This scenario serves as a tutorial, giving you a low-combat situation allowing you to get a feel for piloting your ship around the treacherous Windy Isles.

Having interrogated the supposed daughter of the dark skinned Catalucian ambassador it is now clear she is nothing of the sort. She waylaid the actual ambassador in a bid to interrupt the talks that could lead to Bron potentially allying himself with one of the major powers of Urop and thus strengthening his hold over the Windy Isles. All sea lanes to his island refuge were believed to be too deadly to traverse. However, realising the game is somewhat up, the Ferach Elf prisoner has shared knowledge with our heroes, knowledge she discovered from Bron's men before the heroes untimely intervention on the docks of Toblerona. She knows the one true way to get through to Bron's island. But that way is still not without it's perils...

Strange Tydes is a cracking set of fantasy Age of Sail naval rules by Wessex Games' set in their fictional world of The Land. For this scernario we use the rules as is but instead use the background of Dreadloque and the Windy Isles.

For many of you I'm assuming this will be your first game of Strange Tydes so don't worry too much about miniatures and scenery. All you need is some kind of paper (the back of unused wrapping paper works well) with which to cover your gaming area and some card to make tokens for each of the ships. You can find the dimensions you need to make each of the heroes ships detailed above on page 7 of the Strange Tydes rulebook. The sea area should be 48cm by 48cm.

The next thing you have to do is create the series of islands through which you'll have to navigate. These small islands on the Western edge of the Windy Isles were originally known as the Comet's Fall Islands but all throughout the Windy Isles people now refer to them as Lucci's Run. I'll leave this to your imagination (worry thee not about artistic skill) but there should be a series of small islands and rock outcrops scattered around all the way from the bottom edge of the board to the top. Each rock outcrop is considered to have a CR of 5 as per the rules. The islands are all depth 0, draw a line 1cm away from the island shore, this is depth 1, another line at 2cm, this is depth 2 (you won't need any other depths in this scenario as the ships above have base CR of 2 and 3). Full details of terrain can be found on page 16 of the Strange Tydes rulebook.

After you have drawn up the map roll 1D8 for each island. On an even roll that island has a land based fortification. Roll another 1D8 to determine it's CR and another to determine the direction it faces (1=North, 2=North East, 3=East etc). Full rules for Fortifications can be found on page 18 of the Strange Tydes rulebook.

Bron has used his mysterious 'smoke' to bring several of the almost monstrous creatures of the deep oceans to heel and they now protect him and his ships in the Windy Isles. At the start of the game place a marker representing a Kraken in the centre of the top edge of the playing area. Control of the Kraken is handled by the rules as normal, see page 19 for full details.

Our heroes ships can start anywhere they choose on the tables bottom edge. Whoever captured the 'Ambassador's Daughter' prisoner in Act I gets a full turn before either of the other players can move.

An Introduction to Strange Tydes (by Steve Blease himself, taken from the rulebook)

As with other games we have written under the Wessex Games label, playability and simplicity in games design have taken precedence over strict accuracy, although care has been taken to ensure that games are not spoilt by outrageous results, or wholly unbalanced "fantasy" inventions. We felt it was important in creating a fantasy world that this world, despite the "Carry On..." humour we've injected into it, was fundamentally coherent. This is why the "fantasy" elements, such as balloons and subs, and even magic are not "killer" weapons. We hope we have injected just enough fantasy to make Strange Tydes distinct from its historical prototypes, but not so much as to make it silly.

The mechanisms chosen in the game follow the Ten Minute Rule - that is, they can be explained to a novice in ten minutes or less before games begins. We believe that most players want to get their ships out on the table and shooting each other as soon as possible, rather than involve themselves in the complex ritual of rote learning pages of rules. We believe the art of good games design is best shown by producing believable rules within the Ten Minute Rule boundary.

Getting Hold of Strange Tydes

You can buy Strange Tydes right now over on Wargame Vault, currently discounted to £2.50, these rules will be playing a major part in the continuing adventures of Dreadloque here on Orcs in the Webbe throughout 2013. If you don't own them, do yourself a favour and grab them now.

"The Goblin in the Smoke" continues here on Orcs in the Webbe!

This adventure was written exclusively for Orcs in the Webbe and was first published on Monday 3rd December 2012 as part of the 2012 Advent Calendar.