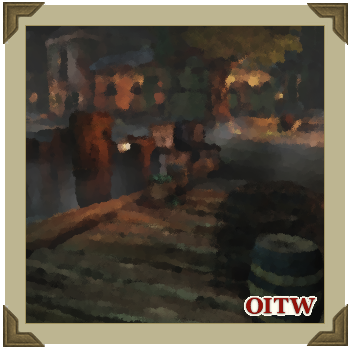 In which a simple meeting to discuss a map becomes something of a brawl.

The wild island of Toblerona – named after its strange triangular rock formations – is a famous pirate haunt which no nation claims for itself. Almost lawless, with just the vague “Pirate Code” holding here, scoundrels of all races mix to trade, drink, fight and otherwise enjoy themselves. In one of its many drinking establishments our story begins!

Captain Jack Crebain, infamous Orc pirate, is holding court in the “Merry Widow” tavern. Close by is his new Mate, Flasszy (cue overacting Flassz-Orc!), with other members of his motley crew around. The Captain is currently in deep conversation with a Halfling (one of Bilbo Marley's followers). Flasszy is trying to eavesdrop the conversation, but Captain Jack keeps growling him away. There is a brief flicker of movement across the table, and the Halfling downs his pint before disappearing quick as you like.

Captain Jack turns to Flasszy and the rest of the crew, beams a broad grin and calls for more rum. Just as the barmaids are bringing the booze, the tavern door bursts open and in walk a group of Ferach.

“Capitaine Jacques? We come from Capitaine DuBois to demand what is his due!”.

“Well, lads, why don't you come over and tell us what Captain DuBois thinks is his, then?”, replies Crebain as he stands up and starts to draw his cutlass...

The two sides line up for a fight – Cap'n Jack with his Orcish lads, and some of DuBois' Ferach. Various onlookers of various types may or may not join in.

The bar is probably best represented by a 2'x2' board, with scattered tables and chairs. Newcomers start in corners or edges (wherever seems appropriate!). If possible, mark the positions of doors and windows for entry and exit points!

(For the various pirates, I used a mix of Flintloque and fantasy plastic figures).

Each turn of the game, roll 1D6 for new additions to the fight.

Special Notes for this Pub Fight

I) Firearms ain't natural in a pub brawl – anyone that fires a pistol causes 1D3 NPCs to join the other side!

II) NPCs can be of any race (whatever you have available) – most will be average, armed with knives or improvised weapons.

III) Cap'n Jack has most of his crew ready aboard the “Black Warg”, and so doesn't expect any reinforcements. His crew should aim to exit the tavern and head for the ship – any that get out of the tavern door are assumed to have escaped.

IV) The cloaked stranger is actually Louis Glorfindelle – he has a small ship with a crew of Ferach in the harbour, and he has pursued DuBois to Toblerona.

V) If Jack is put out of action in the fight, the first figure to reach him can rob him of the map that he got from the halfling – this is what DuBois' crew were after, and whoever gets out of the tavern door with the map (probably best to use a counter for this) has got it for the next section “Return to Traitors' Island”...

This article was written exclusively for Orcs in the Webbe and was first published on the 7th December 2008 as part of it's 2008 Advent Calendar.