Bilbo Nesta Marley and The Macaroons

"Bilbo Nesta Marley and The Macaroons" 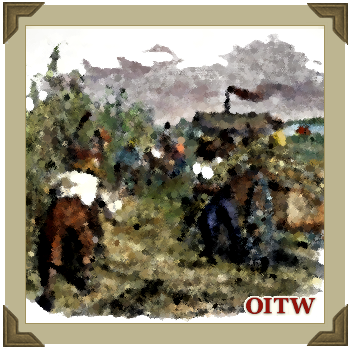 In this Saints Day exclusive scenario we get a glimpse at the origins of some of the legendary characters from Danny O'Hara's piratical take on Flintloque, Dreadloque, as the Jamcakey born halfling Bilbo Nesta Marley takes his first steps of rebellion under the leadership of Drogo Dekker.

Young Bilbo Nesta Marley lay awake before dawn, contemplating the events of the night before. After the usual hot and tiring day cutting sugar cane in the plantation fields, the halfling slaves had sat down to eat their cornmeal porridge around the camp fires. As was the normal routine, some of the slaves would start singing, and the rest would either join in or listen.

Then one of the main troublemakers in camp – Drogo Dekker - started singing of freedom and uprising. Some of the slaves nervously moved away from him, but others (including Bilbo) joined in the song. After a little while, the overseers caught on to what was being sung, and moved in to quiet the slaves with whips and clubs. The singing soon stopped, except for Drogo who was hauled over to the whipping post and chained to it, his arms above his head. The overseers whipped him until he passed out – but he was singing all the way until then. A lesson had been given; don't do anything to upset the overseers, or that would be you.

The rest were then taken to their huts, and chained up for the night. Bilbo lay awake, thinking about escape.

A few months later, he was one of the Macaroons – escaped slaves who lived a desperate life of banditry and evading Albion patrols up in the mountains of Jamcakey. The leader of their little band was Drogo Dekker; he and Bilbo had managed to escape together soon after the singing incident. Fleeing into the Foggy Mountains, they came across a small, starving group of runaways including young Pippin Tosh and Merry Wailer. With his infectious charisma, the older Drogo Dekker quickly took charge, and the group went from a life of subsistence thievery to becoming anti-slavery activists!

This is the first of their actions.

For their first anti-slavery raid, Drogo has decided to lead the Macaroons in a bid to free the slaves of the Tuckshoppe Plantation, close to the mountains where they are encamped. The plan is to sneak up close to the slave gang, kill the supervisors and get away with the freed slaves before orc soldiers arrive to recapture them. Seems simple enough, but can it work?

NB: These halflings use the FLQ stats (Hand-to-Hand Combat Modifier +3; can run for 3 turns), rather than the standard Dresda stats.

The table (90x120cm, or as preferred) should be set up with lots of vegetation cover (scrub, sugar cane, woods, etc.), especially close to the Macaroon starting edge. There should be a watchtower (or pile of rocks) on/towards the opposite edge, approximately 40cm from the centre. 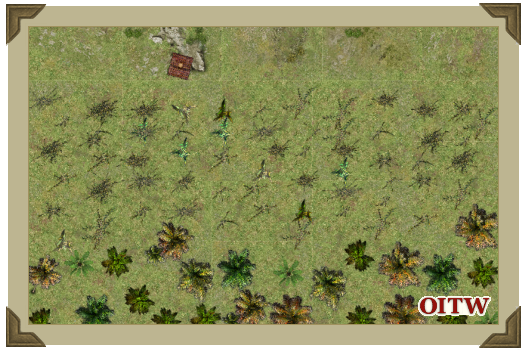 The Overseers are positioned roughly in the middle of the table, with a group of 6 halfling slaves that they are watching work. The Macaroons start in the middle of one long edge (in cover). The two orc archers begin in the watchtower (or on the rock pile), and the other orcs are off-board to start with.

The aim of the Macaroons is to sneak in, kill the Overseers, free the slaves and get off by their starting edge. The Orcs need to prevent this, but cannot react to the halflings until they are spotted.

The Overseers - The overseers are busy watching the slaves, and shouldn't be too difficult to sneak up on, and the archers are mainly looking out for escaping slaves, rather than raiders. Each turn, each of the sentries my roll to spot a moving halfling – the chances are:

Stealthy Attack - Once they get within a move of one of the overseers, the halflings may attempt to make a sneak attack. If successful, an immediate Hand-to-Hand combat is resolved, with the overseer counting as Attacked in Rear. The chance of a sneak attack is 60%, modified by:

The Slaves - The slaves will take no action until freed (which takes a Macaroon to move into contact), at which point they will move at full speed away from the nearest orcs in the following turn.

Reinforcements - Once the archers have spotted at least one Macaroon, then on the next turn start rolling for the arrival of the rest of the patrol. Chances start at 20%, and increase by 10% per turn. On a successful roll, the patrol arrives by the watchtower/rock pile.

The above adventure was written (and playtested) with Dresda, the original prequel to Flintloque that shared mechanics with Flintloque 1st Edition. It can be played as is with that ruleset.

Danny has written the scenario so that it can easily be played with Flintloque 3rd Edition with a few tweaks. If doing so it's recommended that you use the fantastic 3e skills, traits and flaws system to add extra flavour to your troops.

Statistics for Bows are not found in Flintloque 3e but Gavin Syme, lead writer for AA and the World of Valon, wrote these stats for Hunting Crossbows a few years ago and you can use them in place of bows:

An Orcs in the Webbe Original! The above scenario was written exclusively for Orcs in the Webbe's 2015 thematicaly linked Saints Day adventures and was first published on St Patrick's Day, the 17th March, 2015.

The 2015 Saints Day Scenarios Theme - Before the Rise of Blackpowder...

The Saints Day scenarios are specially commissioned exclusive Orcs in the Webbe original adventures that are in some way linked to the Saints Days observed in Wales, Ireland, England and Scotland.

This year each of the author’s writing the adventures is from the Saints Day’s country in question.

For the theme I thought it would be good to see where various characters we read about on OITW come from and that in turn led me to think about what they were doing in the time before Blackpowder. I loved the original Flintloque 'prequel', Dresda, and was also a great fan of it's successor, Darkestorme. Both look at what Valon was like as a fantasy realm. Whilst each is at it's core a high fantasy ruleset, there's enough of Valon in there to make them feel different to other fantasy games. These adventures are from that time, when magicke, monsters and treasure filled the land. I hope you enjoy reading this years Saints Day tales as much as I have.

The original Dreadloque adventure has been part of Orcs in the Webbe since its creation back in 2004, to find out more about it and its sequels click on the  Dreadloque maroon link  below and to the left.