Emeritas Kerr and his Tocs Borderers patrol are ambushed by Yordist insurgents whilst on patrol.

Emeritas Kerr began the morning patrol as he always did, with a long forward drop of his well-muscled, tattooed right arm. As the other three Tocs Borderers took their intervals in the snaking Indian single file line behind him, Kerr wondered if they were going to be hit today. Other patrols had taken a walloping in the past month. He and his men had been lucky so far.

Improvised Explosive Devices (IEDs) created from scavenged military munitions, mines, old fashioned dynamite or in some cases a few hundred pounds of fertilizer, easily found on the surrounding farms outside of the city. Bomb making had seemingly become a fashionable hobby among the remaining Yordist insurgents left behind ensuring the populace remained stirred up and unable to make a normal life for themselves.

After walking for an hour down the crowded narrow streets, which snaked in a maddeningly confusing fashion, through the slums of Zone 5, Kerr raised his hand and shot a narrow band message to the members of his squad of Mercenary Mustermen.  “Take ten in the shady part o’ the market square lads. Use the fountain walls as cover. Brennan, you take point when we go. I’ll drop ta number two.”

The squad sighed with relief as one as they rested packs against the cool shady wall of the fountain. It’s bubbling water cool and tranquil to the mind. Kerr filled his pipe and kept watch on the rooftops and alleys as his lads drank water, smoked and hurriedly wolfed down a bit of cold ration. His squad’s chosen man, Craig Cormier, silently chewed on a dry cracker topped with some sort of meat paste as he watched the locals moving by them as they sat. He would bring up the rear of the formation when they moved out on the second leg of the routine patrol.

These patrols never took the same route, they always changed, but this precaution was somewhat affected by the fact they had to always cover the same ground. Ground dictated by the confines of their current area of operation this made them vulnerable to sudden attack by a variety of different means.

The ten minute respite passed all too quickly.

“Off and on! Time ta earn yer pay.” Kerr commanded his Borderers.    Once again the patrol paced its way along the street, the crowd thinning as they went, until there were only a very few civilians around them. Kerr tensed, his senses on edge as he noted this. Sometimes in Yordist friendly areas the civilians were warned of bad things about to happen. Passing a short row of vendors carts Chosen Man Cormier was startled to see one of the brightly coloured cart balloons seem to catch the breeze and break away from its fellows in the bunch. Cormier’s guts froze as he realized there was no wind!

Kerr felt himself get pushed to the ground by the blast wave before he heard the roar of the explosion close behind him. He tried to focus but his mind was numb. He was slow to react to the stinging chips of brick splattering his body as the incoming 9mm rounds chewed up the walls and suddenly he noticed one of them was, Cormier had charged forward towards the ambush point and was laying down covering fire and yelling for the others to pull themselves together and “Get a bloody move on!” There were civilians screaming and crying all around them as they scrambled to get out of the way of the fighting. The scene seemed surreal as while Kerr could see lips moving and weapons flashes, he couldn’t hear a single sound.

A copy of IAG001 Firefight 2.0 Killing Streets for the Firefight rules is necessary to play this mission. Also required are two squads of ION Age Muster miniatures.

This mission is for two players, with one player taking a Canlastrian squad of Mustermen out on a routine street patrol.

The other player commands a squad of Yordist Mustermen insurgents, out to destroy the Canlastrians by any and all means possible.

The objective of this mission for the Yordist is to kill every single Canlastrian mercenary, utilizing the surprise blast of a concealed Air Mine and a hidden ambush to do so.

The objective of this mission for the Canlastrian player is to survive the initial onslaught, recover and then destroy their attackers. See the special rules for this scenario.

A line of four street boards running North-South. It is flanked by buildings and alleyways. The alleyways are represented by 2x5 pavement sections. The Yordist player can place three Skimmers (1x2, DS2), two of the big cars (2x2, DF3) and one of the small cars (2x2, DF2) to represent market vendor’s stalls anywhere on the road edges. Then place 2 debris markers randomly on each street board (use 1D6 x 1D6 to determine square, just re-roll any sixes). 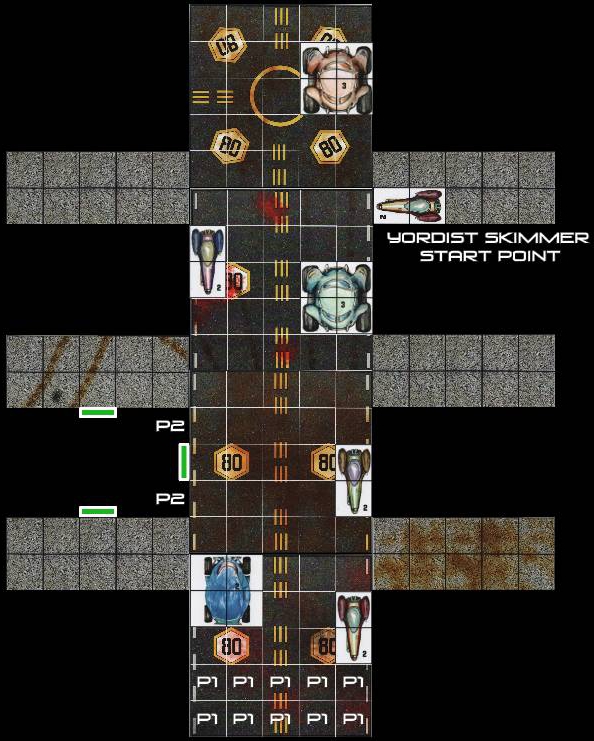 You have a 105 point veteran squad of Muster troops. One veteran Emeritas and three Privates, all armed with Moth Type VI Automatic Rifles. You may have four troopers armed with a Hobbes Bomb or two troopers armed with two Hobbes Bombs each.   Place the Scouts on any of the P1 starting places at the south end of the battlefield. On game turn one, your patrol will move north with the intent of exiting the north end of the street on the other side of the battlefield.

You have a 96 point squad of Muster troops. One Emeritas and three Privates, all armed with Moth Type VI Automatic Rifles. You may have up to two troopers armed with a Hobbes Bomb each or one trooper armed with two Hobbes Bombs.

You also have one Air Mine to place, before play begins secretly designate one Skimmer on the board to be your Air Mine booby trapped vendor cart. It’s placement will designate where your squad will deploy (details below). Its cost is included in the calculated total force points above.

Your forces do not start the game on the board. Once the Air Mine has detonated and damage calculated, immediately deploy your forces as follows: Place two men in the building across the road, opposite from where the Air Mine/Skimmer was initially placed, on ‘off-board’ squares adjacent to the road (see special rules for building details and the map for an example of where these deployment squares would be if the centre skimmer was the Air Mine). Then place a stolen 1x2 Skimmer, on any alley entryway of your choice (the front of the vehicle level with the road, example shown on map) at least 2D6 squares ahead of the place where the mine detonates. The Skimmer may immediately move up to 1D6 plus 1 squares, where the remaining two men get out of the vehicle and deploy behind it. Note that on the turn of deployment the Yordists may not move. They may use all of the normal Target Response Options although the two men by the Skimmer are down 1 dice on this first turn. From the following turn Initiative is rolled for as normal.

2. Buildings – The ‘off-board’ sections between alleyways are considered to be buildings. After the Air Mine has detonated and the Yordists deployed, the central square of the building they are in which faces each alleyway and the road are considered normal entrances into the building. It costs two general dice to move through. On the accompanying map an example of these entrances are shown, marked by green squares. The Yordists in the building are initially placed adjacent to the wall facing the road. They count as being in Hard Cover when being targeted, it does not affect them firing as per the normal rules.

This mission is part of the Pacification Firefight 2.0 Campaign Mission Arc, set after the fall of Bosworth IV, and should be played with other missions in the Arc in the correct order.

It may also be played as a stand-alone scenario, in which case it may be expanded by up to two squads of mustermen per side. Or you may try using Retained posts instead of mustermen, or a mix of Mustermen and the Retained to fight the scenario. It makes for a highly entertaining game.

This mission is the fifth of a series of missions in a Firefight 2.0 Campaign Arc which is meant to show the difficulties faced by an occupying force in a built up area in time of war. I have drawn upon the reports of recent military experiences in the modern age and have applied them to this mission arc. When the players have finished all of the missions, it is my hope they will be enlightened to the truly difficult job military personnel have when forced by circumstance and orders to occupy and garrison a city in a foreign land.

This mission introduces the guerrilla or ‘small war’ tactic of ambush, which the players will find to be a very deadly game for their soldiers.

In play testing this mission, my brave Tocs were able to recover and fight their Yordist foes to a draw twice in three games. The third game a number of fortunate rolls for the Yordist enabled them to wipe out the Canlastrians without losing a man! Such is the fickle hand of Lady Fate.