The Yordist Army have been thrown out of Coggshall, but they aren’t through with Sector 17 yet! They will show all of the Pyridian Sector that the war would go on....

Majoris Majors yawned under the raised visor of her helmet as she stared bored and cramped, with the muzzle of her Tumbler Mk III pointed at the floorboard between her knees, from the cab of the military ‘Hummen’ light hover scout vehicle she shared with her medic and driver, Sarge Shield or ‘Doc’ as he liked to be called. Privates Dane and Rose rode in the back seat, keeping watch to the flanks with their Moth VI automatic rifles cradled in the crooks of their arms ready for instant use. The rooftop mounted light sentry gun whirred from the power of the engine battery’s charge, a disconcerting sound to some of the civilians they passed, but secure with the targeting mechanism switched to safe mode.

The Hummen carrying her second squad confirmed via microwave burst transmission over the troop net, that the straggling last truck had finally caught up with the column and they could now pick up speed. Dust billowed out from under the vehicle’s kevla debris flaps as it leads the small supply convoy into District 5. Six vehicles; three heavy air trucks, one fuel tanker, and two ‘Hummen’ armoured escort vehicles - one sporting a Light Sentry Gun complete with gunshield to clear the way of any impediment, huffed and puffed their way down the narrow medieval streets of the now quiet city. Blast damage and the scars of the recent fighting show all around.

The trip into Coggshall wasn’t expected to be hot, insurgent activity was now almost non-existent. The monthly mortality rate for homicide and firearm related deaths were higher in New London than the casualties being taken in District 5, or even all of Zone 17, the last few months. The majority of the combat troops the unit had been supporting had already been sent home to their assault ships orbiting the planet with the fleet, and these rear area commandos; Cannie’s of the Divisional food service support troop and their military police escort were anxious to join them. Others could worry about mopping up operations after this last run.

Sir John ‘Tunny’ Tunstill felt his stomach knot as he watched the Lancastrian convoy approach the air mine spider trap his men had dug under the small cobblestones of the road. The vicious little mine was designed to rise under a passing vehicle and explode under the debris flaps where the now contained and doubled blast force could flip even a troop carrying armoured fighting air mobile vehicle over or shred a civilian air car.

When that mine exploded, his post’s rocket launcher would fire upon the last vehicle in the supply column. Then he and his three retained would work their way towards the centre from both ends. The Yordist Army may have been thrown out of Coggshall, but they weren’t through with Sector 17 yet! Not by a bloody long shot. Tunny and his men would show all of the Pyridian Sector that the war would go on, and there would be no buggering out on the part of the Canlastrians… their government was short sighted, sublime, and foolish in their arrogant, amateurish, ignorance of military matters. Soldiers deserve soldiers to command them in war. Now these Canlastrians would pay the price for their government’s meddling in a military campaign.

A copy of IAG001 Firefight 2.0 Killing Streets for the Firefight rules is necessary to play this mission. Also required are Ion Age miniatures to represent two squads of Muster troops and one post of Retained.

Player Two commands a Retained Post of Yordist, led by a newly arrived Retained Household HW Knight. The Yordie Post has been ordered to make a show of force by destroying a Canlastrian supply column.

The mission objective for the Canlastrian player is to exit has many vehicles off of the far board edge as they can. See the special rules for vehicles in this scenario.

The objective of this mission for the Yordist is to stop and kill as many Canlastrian supply vehicles as they can. 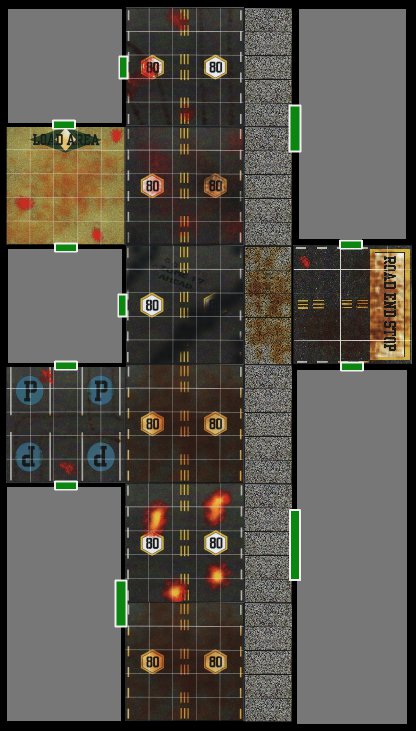 You have 91 points forming two squads of Muster troops. The first squad has one Majoris (Majors) with a Tumbler MkIII SMG and an Octa Sword, one Muster Medic and two privates, each with a Moth Type VI assault rifle, riding at the head of the supply column in a Hummen scout vehicle (no cost).

The second squad has one Emeritas and three Privates all armed with Moth Type VI assault rifles. The Emeritas also packs a Hobbes Bomb. They too are mounted in a Hummen scout vehicle (no cost).

Place the Canlastrian vehicles on P1’s starting place at the south edge of the board, they will move onto the board in a northbound convoy at the start of turn 1. Player One may choose the speed of their unit’s entry, but the squads must be mounted from the first move. Once the Yordist detonate their Air Mine, you have freedom of action. Do you speed up and try and drive around a possibly blazing wreck, or do you decide to pit your men against the enemy while the supply trucks drive on?

There are no options for these squads.

You have a 99 point elite Post of Retained troops. One HW Knight with a Minstrel Taser and a Hobbes Bomb (Tunstill), two HW Esquires, armed with an Anvil 888 Rocket Launcher and an additional 31 points worth of 50mm rounds, the loader also packs a Tumbler Mk III SMG, and one Household Esquire with a 12.5mm Angis Automatic Rifle and two Hobbes Bombs.

You also have one Air Mine spider hole trap to place anywhere along the road you choose, it should be used to stop the lead vehicle. Note this location on a separate piece of paper before play begins.

Place your men on P2’s starting places along the buildings lining the road. Once your Post triggers it’s Air Mine, turn 2 of the game will begin. Your training tells you to deploy in two sections of two men to tackle this ambush. Roof top positions for the rocket launcher are good! Once the shooting starts, the two sections will move their attention towards the centre of the Canlastrian column, destroying vehicles as they go.

The game will last for 1D6 plus 6 turns.

A) Military light armoured vehicles have an armour rating of 4. The civilian contractor trucks only have a rating of 3.

B) Loaded Fuel tankers – If hit and destroyed, roll 1d6. These vehicles may explode with the effects of a Combat Engineer’s Assault Charge. See ‘Demolishing Buildings in Firefight 2.0’ for the description and blast rules. These secondary explosions may destroy other vehicles, buildings, and troops.

C) Armed Vehicles – At the beginning of the scenario roll 1d6 for each Hummen.

D) Vehicle Movement – Vehicles will take actions at one of three declared speeds. Speeds may be changed at the start of each turn. Each speed type generates a possible number of actions. All general actions are to be considered movement for unarmed vehicles. A vehicle may expend one action to halt or to start. Passengers must use a general action to embark or disembark a vehicle. Armed vehicle actions are general/movement or fire just as for a man. However, an armed vehicle may always swap a fire action for a general/movement action.

A figure being run over by a vehicle may use a normal dodge move, or take an armor hit versus a strength of 5.

2. Buildings  – The ‘off-board’ sections (shown as grey squares on the map) are considered to be buildings. The central square of each building which faces an alleyway or a road are considered normal entrances (doors) into the building. On the accompanying map these entrances are shown, marked by green squares. It costs two general dice to move through a door. Walls block standard line of sight, however, any figure inside the buildings adjacent to the wall may fire at figures outside at no penalty, representing windows or access hatches granting them LOS to the street. These figures, whilst adjacent to the wall, can in turn be targeted by those outside. They are treated as being in Hard Cover. There are no exits other than those marked.

3. Weather  – Periods of bad weather can limit visibility on the battlefield. Instances of heavy fog, rain, or snow can drastically shorten combat ranges, and these conditions can change quickly, either worsening or improving. At the start of each game turn roll 1D6 and adjust the spotting range available to your soldiers:

4. Terrain  – Roll a second 1D6 at the start of the game only, this die sets the movement restriction for weather degraded terrain, which will remain unchanged for the duration of the game. On an odd (1, 3, 5) roll, each outside (non-building) square cost one additional general die for a character or vehicle to enter. On an even roll (2, 4, 6) there is no terrain degradation due to weather.

This mission is part of the Firefight 2.0 Pacification Mission Arc, set after the fall of Bosworth IV, and should be played with other missions in Arc  in the correct order.

This mission is the ninth and final of a series of missions in an Firefight 2.0 Campaign Arc which is meant to show the difficulties faced by an occupying force in a built up area in time of war. I have drawn upon the reports of recent military experiences in the modern age and have applied them to this mission arc. When the players have finished all of the missions, it is my hope they will be enlightened to the truly difficult job military personnel have when forced by circumstance and orders to occupy and garrison a city in a foreign land.

The mission introduces the concepts of vehicles, and the possible impacts of weather on vehicles in battle. Players will find vehicles add an extra layer of difficulty and many challenges for their troops to overcome in their missions, as the thundering roar of turbine engines fill the air. The Canlastrian force was able to escape to fight another day in two games, and died in a running gun battle in another game.