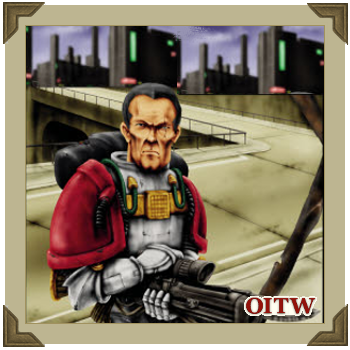 Prydian Retained Knights set about clearing Canlastrian Mustermen from a secure stronghold when then come under off-table artillery fire.

‘I don’t like it. The place is too bloody quiet.’

Lowering his visinoc viewer from his eyes Jupon Alderick pondered the roadway ahead. It was indeed empty of life but it was littered with debris and abandoned vehicles. Though that was no odd in the slightest as every street in Neu-Boston was now in partial ruin due to the ongoing fight to drive out the League of Canlaster. Alderick pinged his second in command.

‘I agree Delaware it is ghostly indeed. But proceed we must. Others rely on us.’

Standing, the Jupon gave the signal for the patrol to move forward towards what seemed a very regular row of traffic barriers that stretched across the rubbacrete of the road. A very regular row indeed. That seemed wrong somehow what with all the destruction around them. But before Alderick could ponder it further he heard a low but always rising pitched scream that set off alarms on his helm display.

‘Run, all of you, run. Incoming Squires. We have seconds at most. Charge!’

This scenario introduces Command Teams to both sides but also gives players their first taste of not only longer range combat but also Off Table Support. That means a two wide by five long playing area and artillery strikes to contend with.

The objective of this scenario is for the Prydian Retained Knights to make their way up the playing area from their starting positions to reach and clear the Canlastrian Mustermen from their stronghold. Meanwhile the Canlastrians will be trying to drop artillery rounds from a far away Vicar type 132mm mortar on them and then using their own personal weapons to hold their position.

Starting Waypoint instruction for the Prydian Teams is to reach B5 by way of A9 then C6 then B4 but this route may be changed in play as long as B5 remains the final objective. The Canlastrians begin in B5 and are free to set Waypoints as long as they do not enter any tiles except A5,A4,B4; the rest being off limits to them in play.

There are five teams from two sides in this scenario and their set up is given on the battle boards by the coloured circles which represent them. The RED circles are Prydian Retained while the BLUE circles are Canlaster Muster.

Arrangement of characters within each team and team placement on the assigned squares is the owning players choice.

The Prydian Retained are made up of three Teams of four characters each. A Command Team of four Retained Bannerets with typical command gear, A Fire Team of four Knights armed with Angis 12.5mm Rifles (see page 36 & 38 Profiles) and another Fire Team of four HW Knights equipped with heavier weapons composed of two Ron 32mm, one Hermit 44mm and one Angis 12.5mm Rifle. The Canlastian Muster consist of a Command Team of Muster Majoris with typical command gear and a Fire Team of Muster Privates with Moth Type 6 Rifle (see pages 36 & 38).

Miniatures for these teams are from HOF1, HOF2, HOF3, HOF5, HOF6 codes. There is a normal initiative roll in the first turn. Good luck

In this scenario you feel the power of off table support for the first time. See page 37 for Artillery Strike statistics and page 19 for the rules for calling in an Artillery Strike. The Canlastrian command team has TWO lots of support to call upon as per the normal rules. Select a Waypoint reference as target but it may not be used on battlegrounds B5,B4.

Secondly you will have noticed a line of barriers across the road in battlegrounds A2 and A9. These count as cover as per normal but their special purpose is the hindrance of movement. Any character trying to cross the line of barriers as part of their movement must roll 1D6 and score +4 to make it over otherwise they are halted and must try again next activation.

Optionally if that Team possesses any rolled 6’s from movment they may use one per character for automatic success in crossing the barriers. There are no other special rules or other conditions.

This scenario takes place on an odd shaped layout which is not the normal three by three but rather a long five by two. There is one unique aspect that will pretty much decide the victor and that is ‘when will the incoming rounds land?’. If Prydian Knights are caught in the open by an artillery round they will likely die even with their armour unless in very good cover. But if the strikes are late (most players will call them in for turn one and turn two) and the Knights have closed in…well Canlaster will likely lose. You could always detach the Canlastrian fire team to C6 to try and suppress the Knights.

Enjoy and when you feel ready let’s move on to the next adventure in ‘Rabble Rouser’ right here on Orcs in the Webbe.

You can find the rules for HOF:Fire Team as well as all the miniature codes mentioned above on Alternative Armies Online Store by clicking on this link.

This article was originally published on Alternative Armies' content portal Barking Irons Online on Tuesday 17th July 2012 and is reproduced here with permission.